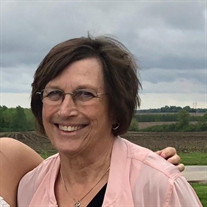 Illinois City - Peggy Diann (Sornberger) Wheeler, 73, Illinois City, passed away Thursday, July 29, 2021, at University of Iowa Hospital with her husband and children by her side. She was born on December 4, 1947, to Ross and Helen (Miller) Sornberger. She married Allen Holden and later married Glenn Wheeler of Illinois City. Surviving is her husband, Glenn Wheeler of Illinois City; two children: Nancy (Joe) Rundle and Bill (Donna) Holden all of Oneida; three grandchildren: David (Cassidy) Hazlett, Galesburg; Dewey (Paige Swanson) Wataga, and Erin Holden, Oneida One great-granddaughter, Vivianne Hazlett, Galesburg. In addition to her immediate family, survivors include two sisters, Joan Hilton, Fairview and Caroline (Fran) Taylor, Silvis, and a sister-in-law, Karen Sornberger, Knoxville. She was preceded in death by her parents and her brother Ronnie Ross Sornberger. She was a 1966 graduate of Galesburg High School and a 1979 graduate of Carl Sandburg College LPN program. Peggy worked in a variety of settings as an LPN, some of which included Galesburg Cottage Hospital, the office of Dr Prakash Khot in Oneida and Galva, Heartland Health Care, and later as a home care nurse. She was a past member of Bethel Baptist Church, and regularly attended Muscatine YMCA. In addition to spending time with her family, Peggy thoroughly enjoyed tending to her flower gardens as well as quilting, crocheting, and sewing. Funeral Services will be held on Sunday, August 8, 2021 at 2:00 P.M. at the Hurd-Hendricks Funeral Homes & Crematory in Knoxville, Illinois with visitation from 12:00 Noon until time of service. Interment will be in the Victoria Cemetery, Victoria, Illinois. Following services, a celebration of life will be held at the Oneida Fire Station, 254 N Sage Street, Oneida, IL. Memorials may be made to the Moody Bible Institute or St. Jude’s Children’s Hospital. On-line condolences and/or expressions of sympathy may be sent through www.hurd-hendricksfuneralhome.com

Illinois City - Peggy Diann (Sornberger) Wheeler, 73, Illinois City, passed away Thursday, July 29, 2021, at University of Iowa Hospital with her husband and children by her side. She was born on December 4, 1947, to Ross and Helen (Miller)... View Obituary & Service Information

The family of Peggy Diann (Sornberger) Wheeler created this Life Tributes page to make it easy to share your memories.

Send flowers to the Wheeler family.