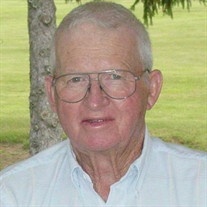 Paul J Newell, age 89, of Yates City, Illinois died at 3:20 P.M. on Monday, February 15, 2021 at his home surrounded by his loving family. He was born on June 30, 1931 in Chillicothe, Illinois the son of John H. and Blanche A. (Beaumont) Newell. He attended Senachwine Country School in rural Chillicothe, Illinois. He married Mary C. Stoecker on June 18, 1955 in Chillicothe, Illinois. Surviving is his wife Mary Newell of Yates City, Illinois; three sons: Randel (Leah) Newell, Roger (Julie) Newell, and Ronald (Debbie) Newell all of Williamsfield, Illinois; one daughter: Marsha (Doug) Strom of Dahinda, Illinois; nine grandchildren and nineteen great grandchildren. He was preceded in death by his parents, four brothers, three sisters, one daughter-in-law and one grandson. He served his country in the United States Army from 1953 to 1955, serving in Germany for thirteen months. Paul was of Methodist faith. Paul began his farming career with his wife, Mary, on a grain and livestock farm south of Williamsfield where he raised his family and continued to farm with a hard work ethic for over 50 years. He loved caring for his livestock and took great pride in his precisely planted straight rows long before GPS was invented. Paul farmed with his sons until his retirement and was so proud that all of his children and grandchildren are involved in agriculture. He loved his family very much and will be deeply missed by all of them. Graveside Services will be held on Monday, February 22, 2021 at 11:00 A.M. at the Williamsfield Cemetery in Williamsfield, Illinois. Paster Teri Shane will officiate. Memorials may be made to the Williamsfield FFA Alumni & Friends and Williamsfield United Methodist Church. On-line condolences and/or expressions of sympathy may be sent through www.hurd-hendricksfuneralhome.com To send flowers or a memorial gift to the family of Paul J Newell please visit our Sympathy Store.
To send flowers to the family in memory of Paul J Newell, please visit our flower store.