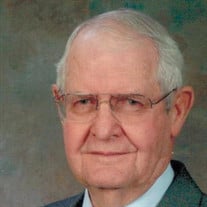 Paul D. Haynes, age 96, of Galesburg, Illinois, formerly of Oneida, Illinois died on Monday, October 5, 2020 at Seminary Manor Nursing Home, Galesburg, Illinois. He was born on April 29, 1924 in Maquon, Illinois the son of Harry and Gladys (McWilliams) Haynes. He attended and graduated from Maquon High School. He married Betty A. Olson on March 31, 1945 in Rio, Illinois. She preceded him in death on February 26, 2015. Surviving are two sons: Jerry (Barb) Haynes of Colfax, Indiana and Alan (Rachel) Haynes of Altona, Illinois; eight grandchildren; nineteen great grandchildren: two sisters: Mary Pont of South Jordan, Utah and Alice (Leon) Uhlmann of Galesburg, Illinois; many nieces and nephews. He was preceded in death by his parents, wife, one sister: Laura Price, two brothers: Emery Haynes & James Haynes, one son: Stephen Haynes, and one great-grandson, Bryson Haynes. Once married to Betty they moved to California where Paul was stationed in the United State Navy from 1945 to 1946. Upon returning to Galesburg they started farming, moving to the farm in Oneida in 1952, then in 1957 to the farm in Altona. He was a member of the Immanuel Lutheran Church in Altona, Illinois and served on the church board. He was a member of the American Legion and the Masonic Lodge. He was an avid pitch player, loved to watch the Illini Basketball and the CUBS. Visitation will be from 1:00 to 2:00 P.M. on Saturday, October 10, 2020, with funeral services beginning at 2:00 P.M. at the Hurd-Hendricks Funeral Homes & Crematory in Knoxville, Illinois. Rev. Tim Anderson officiating. Burial will be in the Oneida Cemetery, Oneida, Illinois with military rites conducted by the Rylander-Milroy American Legion Post of Oneida, Illinois, Memorials may be made to the Bryson W. Haynes Foundation, Immanuel Lutheran Church or the American Cancer Society. On-line condolences or expressions of sympathy may be made through www.hurd-hendricksfuneralhome.com

The family of Paul D. Haynes created this Life Tributes page to make it easy to share your memories.

Send flowers to the Haynes family.