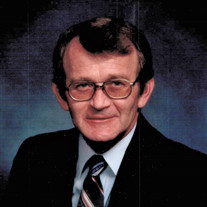 Paul T. “Tall Paul” “Wally” Engstrom, age 77, of Knoxville, Illinois died at 3:59 P.M. on Friday, May 29, 2020 at his home in Knoxville, Illinois after a courageous battle with cancer surrounded by his family. Paul was born on February 13, 1943 in Rock Island, Illinois the son of Lindorff Oscar Sven and Grace Gwen (Bollman) Engstrom. He attended and graduated from Orion High School Class of 1961. He was very active in school, receiving ten varsity letters in football, wrestling and track, he was also vice president of his senior class. He was active in the Methodist Young Fellowship at church. He married Barbara Ruth Matteson on June 21, 1969 at the Faith United Presbyterian Church in Monmouth, Illinois. Surviving is his wife, Barbara Engstrom of Knoxville, Illinois; one daughter, Nancy E. (and Kevin) Terpening of Knoxville, Illinois; two sons: Jim Engstrom (and Wendy Bickell) of Galesburg, Illinois and Alexander (and Tracy) Engstrom of Abingdon, Illinois; five grandchildren: Ashleigh Engstrom, Jayme White, Addison Engstrom, Karl Terpening (and Bailey Austin), and Paul (and Kaylin) Terpening; four great-grandchildren: Billy, Elijah, Xander and Kyleigh. Many nieces and nephews. He was preceded by his parents, one brother, Lee Engstrom, a daughter, Kathryn L. Langwell and a son-in-law, Ross Langwell. Paul grew up on the family farm in Rock Island Township and rural Lynn Center, Illinois, working on the farm and Regal Pack. He raised swine and sheep, and corn, showing this at 4-H, Osco Hustlers. He was club president for two years. Then he worked for International Harvester (Farmall Works) in Rock Island, Illinois before serving in the United States Army. He served his country from 1964 until 1966. Then, he worked as a claim’s adjuster for Country Companies Insurance from 1967 until 1997 retiring as Senior Claims Adjuster. He received his Bachelor’s Degree in 1976 from Western Illinois University. He was a member of the Grace Lutheran Church in Knoxville, Illinois. He loved his family and enjoyed his friends. He loved his corvettes. Visitation will be held on Friday, June 5, 2020 from 10:00 A.M. to 1:00 P.M. at the Hurd-Hendricks Funeral Homes & Crematory in Knoxville, Illinois. Funeral Services will be held on Friday, June 5, 2020 at 1:00 P.M. at the Hurd-Hendricks Funeral Homes & Crematory in Knoxville, Illinois. Rev. Michael Lawyer will officiate. Due to the COVID-19 restrictions, social distancing and masks will be required. Memorial contributions may be made to Hospice Compassus, Galesburg, Illinois. Online condolences and expressions of sympathy may be made through www.hurd-hendricksfuneralhome.com.

The family of Paul T. "Tall Paul "Wally" Engstrom created this Life Tributes page to make it easy to share your memories.

Send flowers to the Engstrom family.