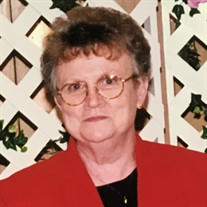 Patricia Rohrer, age 78, of Galesburg, Illinois, died on Monday, January 15, 2018, at 5:35 A.M. at her home. She was born on March 17, 1939 in Galesburg, Illinois, the daughter of John Henry and Evelyn (Carroll) Teel. She married Robert Wayne Brush on April 21, 1956, Galesburg, Illinois. She later married Larry D. Hurr on June 20, 1970, Galesburg, Illinois. She was later married to Donald Rohrer on March 15, 1980 in Galesburg, Illinois. She is survived by her children: Debra L. Brush of Farmington, Illinois, Randy W. (Cathie) Brush of Galesburg, Hope L. (Daniel) Goad of Galesburg; three grandchildren: Roger W. Brush, Keith A. Brush, Kevin D. Brush, all of Galesburg; a brother: Raymond Teel of Galesburg; step-brothers: William (Kathy) Bowen of New Mexico, Robert (Jackie) Bowen of Georgia, Jerry (Alfreda) Bowen of Galesburg, and Dick Bowen of Avon, Illinois. She was preceded in death by her parents: John Henry Teel and Evelyn Bowen; and two sisters: Doris Connour and Scherris Middaugh. Patricia worked at Maytag for thirty-plus years as an assembler. She attended the East Galesburg Community Chapel and was a member of the Maytag Machinist Union. She enjoyed bowling and babysitting her grandchildren and furry grandchildren. Patricia was a friend to everyone, and a stranger to no one. Visitation will be held on Thursday, January 18, 2017, from 4:00 P.M. to 6:00 P.M. at the Hurd-Hendricks Funeral Home in Knoxville, Illinois. The Memorial Service will directly follow at 6:00 P.M., Pastor Brian VanArsdale officiating. A fellowship will be held after the service at the Hurd-Hendricks Fellowship Center. Inurnment will be at the Knoxville Cemetery in Knoxville, Illinois at a later date. In-lieu of flowers, memorial contributions may be made to the Knox County Humane Society or Charity of the Donor’s choice.

Patricia Rohrer, age 78, of Galesburg, Illinois, died on Monday, January 15, 2018, at 5:35 A.M. at her home. She was born on March 17, 1939 in Galesburg, Illinois, the daughter of John Henry and Evelyn (Carroll) Teel. She married Robert Wayne... View Obituary & Service Information

The family of Patricia Rohrer created this Life Tributes page to make it easy to share your memories.

Send flowers to the Rohrer family.