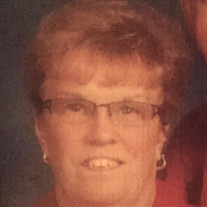 Patricia “Pattie” A. Johnson, age 78, of Galesburg, Illinois died at 7:30 P.M. on Tuesday, January 18, 2022 at Marigold Health Care Center in Galesburg, Illinois. She was born on January 3, 1944 in Trenton, Missouri. She was raised by her parents, William and Frances (Johnson) Collins. She attended and graduated from Galesburg High School in 1962. She married Dr. Robert O. Johnson on April 7, 1964 at the Grace Lutheran Church in Knoxville, Illinois. He preceded her in death on October 25, 2018. Surviving are her sons: William C. “Chilly Willy” (and Kirsten) Johnson of Galesburg, Illinois; Raymond D. (and Linda) Johnson of Michigan and Gregory (and Michelle) Johnson of Lake of the Hills, Illinois. Seven grandchildren and five great-grandchildren. She was preceded in death by her parents, husband and her two dogs, Harley, Sr. and Harley Jr. She worked for the former Holcomb Studios; Teachers Aid for life skills in Knoxville and she did in-home daycare for teachers in the area. She was a member of Grace Lutheran Church in Knoxville, Illinois, the Knoxville Lucretia Luffingwell Chapter of the DAR, the Knoxville Women’s Club, the Red Hat Society of Galesburg, Illinois. Visitation will be held on Thursday, January 27, 2022 from 10:00 am until funeral services at 11:00 am at the Hurd-Hendricks Funeral Homes & Crematory in Knoxville, Illinois. The Rev. Tucker O’Leary will officiate. She will be laid to rest with her husband at East Linwood Cemetery in Knoxville, Illinois. Memorials may be made to St. Jude. On-line condolences and/or expressions of sympathy may be sent through www.hurd-hendricksfuneralhome.com

The family of Patricia A. Johnson created this Life Tributes page to make it easy to share your memories.