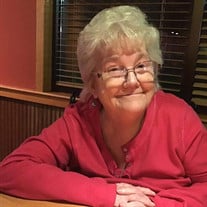 Patricia J. “Pat” Haneghan, of Galesburg, formerly of Knoxville, passed away on Thursday, February 18, 2021, 11:15 PM at OSF St. Francis Medical Center, Peoria. Pat was born on January 24, 1938 in Galesburg. She was the daughter of Faye and Flora (Thurlby) Smith. Pat married Leon Haneghan on June 22, 1957 in Galesburg. They spent 34 years building a life together. Pat is survived by her children, Kevin Haneghan of Galesburg, Kellie (Rick) Ward of Alpha, Wendy (David) Hess of Galesburg, and Tami (Mike) Haneghan-Lawson of Galesburg; eight grandchildren; nine great-grandchildren; and several nieces and nephews that she raised. She was preceded in death by her parents; her twelve siblings; and Leon. Pat is a graduate of Galesburg High School. She was a waitress for over thirty years at Soangetaha Country Club, retiring in 2000. Pat was a member of Corpus Christi Catholic Church. She was an avid Chicago Cubs fan, enjoyed a hot fudge cake from Kastle Kreme. She also enjoyed playing solitaire, music whether she was listening or singing and dancing. Most importantly, Pat loved her family and spending time with them. She always made time for her grandchildren and her great-grandchildren. She was the kindest, most compassionate person who put everyone first. Her smile and laugh could light up a room. Cremation rites have been accorded. A celebration of life will be from 4-7 PM on Friday, February 26, 2021 at the Harry Philblad American Legion Post #749 of Knoxville. A private family burial of cremated remains will be held at the cemetery in Alpha on a later date. Hurd-Hendricks Funeral Homes and Crematory, Knoxville have been entrusted with arrangements. Due to COVID-19, social distancing, face masks, and some attendance guidelines will be required. Memorials may be made to the family in care of Wendy Hess for a memorial marker. On-line condolences and/or expressions of sympathy may be sent through www.hurd-hendricksfuneralhome.com

The family of Patricia J. "Pat" Haneghan created this Life Tributes page to make it easy to share your memories.

Send flowers to the Haneghan family.