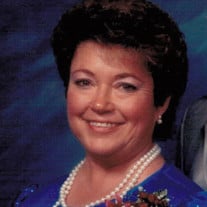 Patricia I. “Patsy” DePauw, 81, of Victoria, passed away on Sunday, January 17, 2021, 2:00 pm, at Toulon Rehab and Healthcare Center, Toulon. Patsy was born on December 29, 1939 in Cambridge, IL. She was the daughter of Antone and Carolyn Bernadine (Verscha) Calsyn. Patsy married Oscar DePauw, Sr. on November 23, 1957. Together they celebrated 55 years of marriage before he preceded her in death on January 7, 2013. Patsy is survived by her children, Cheryl (Rod) Mackie of Laura and Oscar (Kari) DePauw, Jr. of Altona; seven grandchildren, Christopher Varner, Amber Varner, Benjamin Hootman, Jr., Anna Hootman, Alison DePauw, Kevin (Taylor) Frye, Sydney DePauw; two step-grandchildren, Brian (Jessica) Mackie and Kristy Mackie; eight great-grandchildren; a sister, Roberta (Eugene) Achterhof of Eugene, OR. She is preceded in death by her parents, husband, and one daughter, Catherine Hootman. Patsy was a graduate of Cambridge High School. She worked as a medical office manager in Peoria and Victoria, until her retirement in 2008. She was a member of the Hook and Bullet Conservation Club of Victoria. She enjoyed fishing, crocheting, gardening and watching the PBR on television. Most of all, Patsy enjoyed spending time with her family. She lived for her grandchildren and great-grandchildren. Visitation will be from 6-8 P.M., on Thursday, January 21, 2021 at Hurd-Hendricks Funeral Homes and Crematory, Oneida. Funeral service will be 10:00 A.M., Friday, January 22, 2021, at the funeral home in Oneida. Burial will follow services at Victoria Cemetery, Victoria. Hurd-Hendricks Funeral Homes and Crematory, Oneida has been entrusted with arrangements. Due to COVID-19, face masks and social distancing will be required. Memorials may be made to Hook and Bullet Conservation Club of Victoria, IL. Online condolences may be left to the family at www.hurd-hendricksfuneralhome.com.

The family of Patricia I. "Patsy" DePauw created this Life Tributes page to make it easy to share your memories.

Send flowers to the DePauw family.