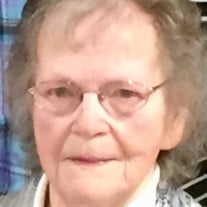 Patricia A. Clewell, age 83, of Galesburg, Illinois died at 3:00 A.M. on Saturday, March 21, 2020 at her home in Galesburg, Illinois. She was born on February 6, 1937 in Dahinda, Illinois the daughter of Glen and Rosa (Howard)... View Obituary & Service Information

The family of Patricia A. Clewell created this Life Tributes page to make it easy to share your memories.

Send flowers to the Clewell family.