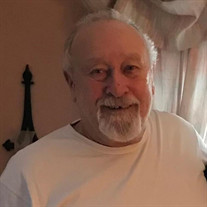 Norman F. Clark, 73, of Galesburg, passed away peacefully at home with family at his side on Friday, March 5, 2021 at 6:47 AM. Norman was born on July 13, 1947 in Sheldon, Iowa. He was the son of Edward Charles and Beverly Jane (Schutte) Clark. Norman married Jacqueline Barndollar on August 5, 1966 in Arizona. He later married Judy Howland-Banks on March 23, 1991 in Galesburg. Together Judy and Norman celebrated 30 years of marriage. Norman is survived by his loving wife, Judy; children, Deana (Tony) Staffa of AZ, Michael Clark of AZ, Rebecca (George Michaels) Lisenbee of Galesburg, Laurie (Corey) Lee of Alexis, and Tommy (Amanda) Clark of AZ; siblings, Susan Murphy of NC, Sandra (David) Adams of AL, Thomas (Kathy) Clark of AL, Chris (Bob) Boone of AL, Rick (Greta) Clark of AK, and Julie (Joe) Nosko AK; grandchildren, Bryan, Brandon S, Ryan, Tyler, Brandon L, Bailey, Cody, Kalyn, Madison M, Hunter, and Madison C; great grandchildren, Jaydin, Riley, Tinley, Brody, Ryder, Colson, and Blake. He was preceded in death by his parents. Norman graduated from Palo Verde High School in 1965. He went on to become a journeyman boilermaker working several years at Palo Verde nuclear power plant in Arizona. He later worked as an accomplished hydraulic mechanic, working in many states until his retirement in 2014 from City Utility Equipment in Chicago. Norman was very active in the Masonic lodges, earning a 32nd degree and was a past master of Abingdon Masonic Lodge A.F & A.M. #185. He was also a member of the Knights Templar of Monmouth, a Shriner, a member of the Harry E. Wiles Post #381 American Legion, Abingdon and a former member of the Moose Lodge #880 of Galesburg. His hobbies included riding his motorcycle, looking at classic cars and was an avid Ohio State football fan. What brought Norman the most joy was his family, especially his grandchildren and great-grandchildren; they were the apple of his eye. Norman was loved by many and will be greatly missed. Cremation rites will be accorded. A celebration of life is planned for Thursday, March 11, 2021 from 4-6 pm at Cedar Creek Hall, 571 E North St, Galesburg. Masonic Services will be held at 5:30 at 5:30 PM. Hurd-Hendricks Funeral Homes and Crematory, Knoxville has been entrusted with arrangements. Memorials may be donated to St. Jude’s Children’s Hospital, The Shriner’s or to the family for a charity to be decided on at a later date. On-line condolences and/or expressions of sympathy may be sent through www.hurd-hendricksfuneralhome.com

Norman F. Clark, 73, of Galesburg, passed away peacefully at home with family at his side on Friday, March 5, 2021 at 6:47 AM. Norman was born on July 13, 1947 in Sheldon, Iowa. He was the son of Edward Charles and Beverly Jane (Schutte) Clark.... View Obituary & Service Information

The family of Norman F. Clark created this Life Tributes page to make it easy to share your memories.

Norman F. Clark, 73, of Galesburg, passed away peacefully at...

Send flowers to the Clark family.