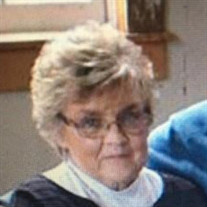 Norma L. Bradley, 80, of Knoxville, passed away surrounded by her family, at 1:25 AM, Wednesday, November 11, 2020, OSF St. Mary Medical Center, Galesburg. She was born in Galesburg on August 2, 1940, the daughter of Norman and Doris (McElroy) Rosenberry. Norma married Robert E. Bradley on May 2, 1959, in Knoxville. Together, they celebrated 61 years of marriage. She is survived by her loving husband, Robert, brother Dwayne (Tamy) Rosenberry of Bristol, IN, sister Elaine (Frank) Dillow of Kewanee, and sister Carolyn (Jerry) Miller of Hendersonville, NC, three daughters, Susan (Jeff) Jefferson of Gilson, Sandra (Mike) Brown of Abingdon, Cynthia (Bob) Siedel of Abingdon. Also surviving are seven grandchildren, Dru (Courtney Haskins) Jefferson of Knoxville, Joshua Thurman of Lincoln, NE, Neal (Amanda) Jefferson of Gilson, Taylor Siedel of Abingdon, Bradley Siedel of Abingdon, Hale Brown of Abingdon, and Alyssa Siedel of Abingdon. She is also survived by seven great-grandchildren, Briahna and Bryce Jefferson of Knoxville, Rachael Tracy of Gilson, Kennedy Anderson of Gilson, Sophia and Ayden Haskins of Knoxville and Harper Heydeman of Knoxville. Norma was preceded in death by her parents. She was employed as a receptionist for Dr. Dale Murdock before retiring in 1995. Norma enjoyed following all forms of sports, concerts, plays and school functions that involved her children, grandchildren, and great-grandchildren. She also enjoyed traveling with Robert to many locations in their motor home and was extremely proud of the fact that they involved their children, grandchildren and great-grandchildren in many of their trips to nearly all the states. She also enjoyed shopping with her three daughters. Norma and Robert worked for Payless Tours as Tour Guides for 12 years, making over 100 bus trips, retiring in 2017. Norma was an excellent seamstress and enjoyed knitting and sewing. Visitation will be Monday, November 16, 2020 from 10:00 AM – 12:00 PM at Hurd-Hendricks Funeral Homes and Crematory, Knoxville. Funeral service will follow at 12 PM. Pastor Will Brown will officiate. Burial will be at Knoxville Cemetery. Due to COVID-19 restrictions, facemasks and social distancing will be required. Memorials contributions may be made to the First Christian Church of Abingdon, Susan G. Komen Foundation, and Autism Speaks. Expressions of sympathy may be left for the family at www.hurd-hendricksfuneralhome.com

Norma L. Bradley, 80, of Knoxville, passed away surrounded by her family, at 1:25 AM, Wednesday, November 11, 2020, OSF St. Mary Medical Center, Galesburg. She was born in Galesburg on August 2, 1940, the daughter of Norman and Doris (McElroy)... View Obituary & Service Information

The family of Norma L. Bradley created this Life Tributes page to make it easy to share your memories.

Norma L. Bradley, 80, of Knoxville, passed away surrounded by...

Send flowers to the Bradley family.