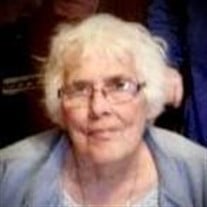 Nancy E. Dikeman, age 85, of Maquon, Illinois, died at 2:16 A.M. on Saturday, December 21, 2019 at the OSF Saint Mary Medical Center in Galesburg, Illinois. She was born on Thursday, March 29, 1934 in Media, Henderson County, Illinois, the youngest daughter of Joseph and Eulahlee (Baker) Campbell. Media is where Nancy would grow up, make many lifelong friends, and go to school, graduating from Media High School with the class of 1951. On Saturday, June 8, 1957, Nancy was married to Robert E. Dikeman in Henderson County. He preceded her in death on Monday, July 22, 2002. Left to cherish Nancy’s memory are her four loving children: Ellen (and Steve) Baker of Knoxville, Illinois, David (and Vicki) Dikeman of Beardstown, Illinois, Joe (and Lorri) Dikeman of Knoxville, Janet (and Roy) McLean of Deerfield, Illinois; five grandchildren: Justin (and Erin) Dikeman of Latrobe, Pennsylvania, Mathew (and Emily) Dikeman of Ankeny, Iowa, Kyle (and Taylor) McLean of Chicago, Illinois, Marley McLean of Deerfield, Allan Dikeman of Tremont, Illinois; five great-grandchildren; two sister-in-law’s, Rosa Simkins of Knoxville, Norma Lee Bigger of Media; her special, dear friend, Mary (and Robert) Addams of Soldotna, Alaska; and numerous nieces and nephews. She was preceded in death by her parents; husband; and all seven of her siblings: Marjorie, Carolyn, Evelyn, Betty, Joe, Ruth, and Virginia. Nancy worked for over fifteen years as a cook at Kersh Café in Farmington; she was renowned for her great gift of cooking delicious meals, such as chicken and noodles, and baking scrumptious candies and pies. She was a very dedicated and active member of her church, the Faith United Presbyterian Church in Yates City, Illinois, where she sang in the choir for many years. Nancy worked beside her husband on the farm for their entire married life in the Maquon and Yates City areas, raising livestock and grain. Many hours were spent picking raspberries and making jams. She was a hard worker and she loved farm life and taking care of her family. Making latch-hook rugs was a favorite past time that she enjoyed, as well as putting together jigsaw puzzles. She enjoyed immensely the two and a half years she lived at Courtyard Estates in Knoxville, where she was able to meet new friends and participate in many activities. Nancy’s family, especially her children and grandchildren, were her heart and joy; time spent at Nancy’s house was very special for her grandchildren. She will be remembered always as a wonderful, loving, and devoted wife, mother, grandmother, great-grandmother, sister, aunt, and friend, and she will be forever missed. Visitation will be held on Friday, December 27, 2019 from 5:00 P.M. to 7:00 P.M. at the Faith United Presbyterian Church in Yates City, Illinois. The funeral service will be held on Saturday, December 28, 2019 at 10:00 A.M. at the church, Rev. Marla Bauler officiating. Interment will be at the Oak Ridge Cemetery in Farmington, Illinois. Memorial contributions may be made to the Knox County 4-H Foundation, the Courtyard Activity Fund, or the Faith United Presbyterian Church.

The family of Nancy E. Dikeman created this Life Tributes page to make it easy to share your memories.

Send flowers to the Dikeman family.