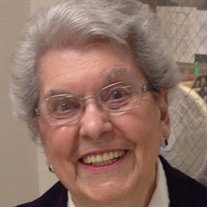 Mrs. Myrtle (Hunley) Hall, 85, formerly of Huntingdon Tennessee, entered eternal life Tuesday, December 1st, 2020 at the Knox County Nursing Home in Knoxville, Illinois. A Celebration of Life service will be held Tuesday, December 29th, 2020 at 11:00 AM at Chase Funeral Home in Huntingdon. Friends may call two hours before the service. Burial will follow at Christian Chapel in Cedar Grove. Mrs. Hall was born February 22nd, 1935 in Paintsville, Kentucky located in Johnson County, one of 12 children, to the late William and Frances (Spencer) Hunley. Myrtle met and committed her life to The LORD at the age of 13. She loved and served Him with her life as a member of His body, the Church. She was a member of the Hebron United Methodist Church of Bruceton, Tennessee. She served her community as a member of RSVP choir, ministering to shut ins in local hospitals and nursing homes across Carroll County. She also assisted with Habitat for Humanity, served as a volunteer at Baptist Memorial Hospital, and as president of the local chapter of AARP. In 2017 she moved to Illinois to be closer to her children where she was active in the local United Methodist Church. She was preceded in death by her beloved husband Lois A. Hall, a son, Robert A. Hall, and 11 brothers and sisters. She is survived by two sons, Garry Hall of Elk Grove Village, Illinois and Ronald (Colleen) Hall of Knoxville, Illinois, a daughter, Pamela (William) TenEyck of Oldsmar, Florida. Her grandchildren, who were the light of her life, Justin (Michelle) Campbell, Jaime (Travis) Steinmetz, Sally (Chris) Blackwell, Kacie Hall, Nicholas Hall, Sarah (Michael) Swanson, William (Janelle) TenEyck, Kelly Hall, Samantha (Tyler) Worthington, Kathleen (Jake) Fetzner, and 10 great grandchildren, Ellie, Logan, Alyssa, Kelsie, Eden, Hannah, Harper, Elena, Lora, Gwendolyn.

The family of Myrtle (Hunley) Hall created this Life Tributes page to make it easy to share your memories.

Send flowers to the Hall family.