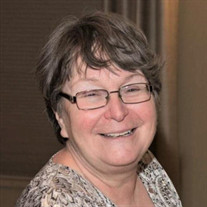 Missy Frances (Chaika) Fitzpatrick, age 58, of Knoxville, Illinois, died on Wednesday, December 12, 2018 at her home. She was born on May 2, 1960 in Galesburg, Illinois to Francis “Finn” and “Dolly” Alice (LaFollette) Chaika. Missy attended and graduated from Knoxville High School. After graduation, she went on to attend Illinois Central College to become a dental hygienist. Once she received her license, she began working in Galesburg in Doctor Sayrs office. Missy is survived by her children: Bethany (and Danny) (Tabb) McGraw, Jr. of Knoxville, Kelly Chaika (and Ross) (Fitzpatrick) McCallister of Willow Brook, Illinois, Laney Mae Fitzpatrick of Knoxville; three grandchildren: Ava Finnli McGraw, Emi Alice McGraw, Ila Lee McGraw, all of Knoxville; her brother, Toby (and Kristin) Vallas of Farmington, Illinois; her nieces: Kiley, Elin, and Jia Vallas, all of Farmington; and her mother, “Dolly” Alice Chaika of Knoxville. She was preceded in death by her father. She was of the Catholic faith, often volunteered for the Prairie Players in Galesburg, and was the Cloverbud Leader for the Wataga Trailblazers 4-H. She was also a Relay for Life team member for ten years, as well as being active in the Knoxville High School Band Boosters for eight years. Missy loved crocheting, gardening, and many different types of crafts. She was a very proud mom and grandma that put a brightness in her family’s life, they were her everything. Visitation will be held on Sunday, December 16, 2018 from 2:00 P.M. to 4:00 P.M. at the Hurd-Hendricks Funeral Home & Crematory in Knoxville. Funeral Services will be held on Monday, December 17, 2018 at 10:00 A.M. at the Hurd-Hendricks Funeral Home & Crematory in Knoxville. Rev. Don Williams will officiate. Interment will be at the Knoxville Cemetery in Knoxville. Memorial contributions may be made to the family, to be used for college expenses for Laney Mae Fitzpatrick.

The family of Missy Frances (Chaika) Fitzpatrick created this Life Tributes page to make it easy to share your memories.