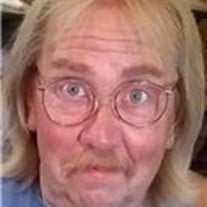 Michael Eugene Thomas Jr. died before he could finish making a magic wand from an exotic piece of ebony wood. The first three he gifted to family members, and he likely would have made this one for "himself" and then given it away as well. A... View Obituary & Service Information

The family of Michael E. Thomas created this Life Tributes page to make it easy to share your memories.

Michael Eugene Thomas Jr. died before he could finish making...

Send flowers to the Thomas family.