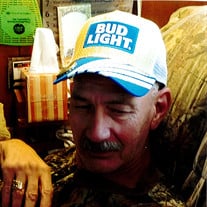 Michael “Greasy” Lawrence Dawson, 63, of Oquawka, Illinois, passed away Sunday, April 8, 2018 at 7:54 PM at the Great River Medical Center in West Burlington, Iowa. He was born January 19, 1955 in Monmouth, Illinois, the son of Jack and Jean (Bird) Dawson. After graduating from Monmouth High School, he joined the United States Navy. He married Karen Wright on August 15, 1994 in Monmouth, Illinois. Michael worked most of his life as a truck driver. He enjoyed all sports including hunting and fishing. He especially enjoyed fishing with his grandson Damien Fues. He is survived by his wife, Karen Dawson of Oquawka, Illinois, 3 children, Dirk (Nicole Scott) Dawson of Abingdon, Illinois, Marsha Thompson (Patrick) Yerkey of Keller, Texas, Alisha (Rachel Fye) Fues of Oquawka, Illinois, 3 grandchildren, Alexis Yerkey, Damien Fues, Sarah Yerkey, and 1 sister, Cindy (Daniel) Barken of Texas. He was also survived by several nieces and nephews. He was preceded in death by his parents, Jack and Jean Dawson, and 2 brothers, Punk Dawson and Robert Dawson. Cremation rites will be accorded with the Hurd-Hendricks Funeral Home and Crematory in Knoxville, Illinois. The family will be hosting a celebration of life service at a later date. Memorial contributions may be left to the family. Online condolences can be made at www.hurd-hendricksfuneralhome.com

The family of Michael "Greasy" Lawrence Dawson created this Life Tributes page to make it easy to share your memories.

Send flowers to the Dawson family.