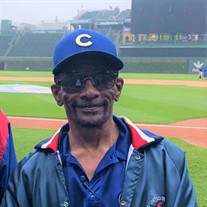 Michael M. “Mike” Allcon, aka “Conman,” 61, of Galesburg, passed away on Saturday, January 30, 2021, 3:25 PM, at OSF St. Mary Medical Center. Mike was born on June 23, 1959 in Peoria to Sherry and Cornelius “Joker” McDonald. He was adopted and raised by his maternal aunt and uncle, James Harper and Addie (Smith) Allcon. Mike leaves to cherish his memory, son, Michael (Nicole Garcia) Allcon of Galesburg; stepson, Adam Spellman of Galesburg; two sisters, Kendra McDonald and Linda Gaines, both of Texas; one brother, Raymond Byrd of Peoria; along with two beautiful granddaughters, Milah and Rudie Allcon. Mike had a special group of friends, Bubba, Dino, Big Joe, Carp, The Donnelly Boys, Infante, Pee Wee, Gibbi, Tommy and Chaney. He was preceded in death by his parents, Harper and Addie Allcon; his birth parents, Sherry and Cornelius McDonald; his sister, Lois Gaines; brother, Randis Bausal; family friend, Miss Louise Duncan; favorite uncle, Marlo Smith; and uncle LD. Mike graduated from Galesburg High School. He worked for the BNSF railroad for 10 years and a Journeyman for the Local 649 Operating Engineer’s Union in Peoria for 29 years, retiring in 2019. Mike loved baseball, he played for multiple teams and sometimes played the game seven days a week. To say he was an avid Chicago Cubs fan would be an understatement. If Mike had a free moment from baseball, he would enjoy fishing, cars, and electronics. He never knew a stranger; he could make friends anywhere he went. He was bigger than life, and his charismatic personality will be missed by everyone who had the honor of knowing him. Cremation rites have been accorded and a celebration of life “Fish Fry” will be held at a later date. Hurd-Hendricks Funeral Homes and Crematory of Knoxville has been entrusted with arrangements. Online condolences may be left to the family at www.hurd-hendricksfuneralhome.com.

The family of Michael "Mike" "Conman" Allcon created this Life Tributes page to make it easy to share your memories.

Send flowers to the Allcon family.