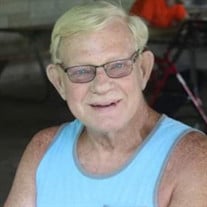 Melvin E. Moore, 71, of Knoxville, passed away on Friday, June 25, 2021, 1:45 AM at OSF St. Francis Medical Center, Peoria. Melvin was born on July 12, 1949 in Canton, Illinois. He was the son of Melvin and Jean (Dainty) Moore. Melvin married Glenda Wilson on June 14, 2003 in Galesburg. They married at the same spot where they met and celebrated 18 years of marriage. Melvin is survived by his loving wife, Glenda at home; his children, Kathy Morgan of Peoria, Sally (Carlos) Cordova of Galesburg, Kim (Roosevelt) Burkett of Galesburg and Michelle (Thomas) Keith of Knoxville; siblings, Bob (Judy) Moore of Canton, Terry (Doris) Moore of Florida, Charles Moore of Texas, Tom (Diane) Moore of St. Louis and Melinda (Ross) Melhouse of Glasford; fourteen grandchildren; nine great-grandchildren; and his best friend, fishing buddy, Jerry Ambrosious of Knoxville. He was preceded in death by his parents. Melvin was a veteran of the Vietnam War, serving in the Army from 1970-1976. After his service, he then worked as an Extruder Operator at Gates Rubber Company before retiring and working as a Mail Carrier for the United States Postal Service for over 35 years. Melvin was an “inventor” and always jotting down his idea for new contraptions in his notebooks. He enjoyed gardening, as well. Melvin was a die-hard fisherman and loved to spend time on the river. He enjoyed bank polling the most, especially when Jerry was with him. He was always at peace when he was able to fish. Melvin was a very outgoing person, who would do anything for anybody. He had a calm presence and never raised his voice towards anyone. Melvin loved his family and always enjoyed the time spent with them, especially with his grandkids. Visitation will be held from 4:00 - 6:00 PM on Tuesday, June 29, 2021, at Hurd-Hendricks Funeral Homes and Crematory, Knoxville. Cremation rites will be accorded after visitation. Hurd-Hendricks Funeral Homes and Crematory, Knoxville have been entrusted with arrangements. Memorials may be made to the family. Expressions of sympathy may be left to the family at www.hurd-hendricksfuneralhome.com.

The family of Melvin E. Moore created this Life Tributes page to make it easy to share your memories.