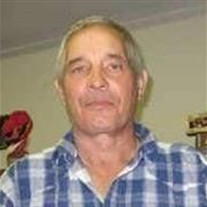 Melvin E. Mathews, age 64, of Gilson, Illinois, died at 5:35 P.M. on Thursday, May 30, 2019 at the OSF Hospice Home in Peoria, Illinois. He was born on April 25, 1955 in Galesburg, Illinois, the son of Vernon “Speck” and Helen J. (McCoy) Mathews. He was reared and educated in the Knox County area, graduating from Knoxville High School in 1973. On September 24, 2005 Melvin was married to Donna K. Kindhart at the Circle “G” Arena on Old Wagon Road. Left to cherish Melvin’s memory is his wife, Donna K. Mathews of Gilson; two children: Jason Mathews of Knoxville, Sarah LeGrande of Monticello, Illinois; two grandchildren: Gage Mathews, Emma LeGrand; and two siblings: Paul (and Ginger) Mathews of De Soto, Missouri, Rita (and Marty) Smith of Pekin, Illinois. He was preceded in death by his parents; one nephew, Marcus Wagnor; and a special friend, Dan Griffith. Melvin farmed for Jim Steel for a number of years, and later worked as a truck driver for Munsons. He then became a dispatcher and worked for Munsons and Star Dispatcher, until its closing. He loved working with and spending time around his horses. He was a big part of the Circle “G” Arena. Cremation rites will be accorded. A Celebration of Life potluck will be held at 11:00 A.M. on Saturday, June 8, 2019 at the Knoxville United Methodist Church in Knoxville, Illinois. Memorials may be made to the family. Hurd-Hendricks Funeral Home & Crematory in Knoxville is assisting the family with arrangements.

The family of Melvin E. Mathews created this Life Tributes page to make it easy to share your memories.

Send flowers to the Mathews family.