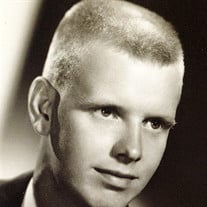 Max A. Olson, 80, of rural Altona, Illinois died at 8:31 P.M. on Thursday, March 22, 2018, at Heartland Health Care Center in Galesburg, Illinois after being diagnosed with Stage IV Pancreatic Cancer last November. Max was born on December 6, 1937, in Galesburg, Illinois, the youngest son of Harry and Ruth (Nelson) Olson of Altona. He attended and graduated from ROVA High School in 1955. He received his Bachelor of Science in General Agriculture at the University of Illinois in 1960. He was a member of the Alpha Gamma Rho Fraternity, where he made many dear friends. He was a member of the 169th Peoria Air National Guard and served one year of active duty. He married Rosalie Augspurger on December 23, 1963, in Peoria, Illinois. Surviving are his wife, Rosalie; and daughter, Angela Olson, both of Altona. He was preceded in death by his parents; his sister, Ruby (Olson) Kimmelshue; and his brothers Harley, Roger, and Sam. Max valued his family, his church, and his belief in helping people whenever he could. He loved to tell family stories and spend time with friends. He was also a life-long fan of the Chicago Cubs whether they had a winning record or not. He loved mechanical things and working on various father-daughter building projects. Many have heard about his “invention” and how it worked. Max farmed the family farm, Sunny Slope Farm, in rural Altona, Illinois, and raised and showed Red Poll cattle for many years. He was hired at the Altona CO-OP in 1992 and worked for that organization through transitions as Gateway CO-OP and River Valley Cooperative, where he retired in 2014. He worked as a substitute teacher in the Knoxville, Stark County, Peoria, Galva, and Alwood school districts. Max also served as a past director of the Mid-Century Telephone Cooperative. He was an active member of the Immanuel Lutheran Church in Altona, Illinois throughout his life. Visitation will be held on Wednesday, March 28, 2018 from 10:00 to 11:00 a.m. at the Immanuel Lutheran Church in Altona, Illinois. Funeral Services will be at 11:00 a.m., and burial will take place after the service at the Oneida Cemetery. A lunch will follow at the church. Memorials may be made to the Immanuel Lutheran Church or to the family.

The family of Max A. Olson created this Life Tributes page to make it easy to share your memories.