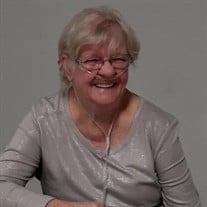 Mary J. Wagher, 81, of Abingdon, formerly of Dahinda, passed away peacefully at home with her family at her side on Tuesday, July 21, 2020 at 2:14 AM. Mary was born on September 30, 1938 in Lewistown. She was the daughter of Harmey and Anna Mae (Newman) Seward. Mary married Harold Wagher on October 17, 1970 in Dahinda. Together they celebrated 45 years of marriage. Harold preceded her in death on October 2, 2016. Mary is survived by her children Margaret Stoneking of Huntsville AL, Alice Downard and Sheryl (Lupe) Rodriguez both of Galesburg; her mother, Anna M. Freeman of Abingdon; siblings, Patricia Jackson of Canton, Janet (Jeff) Hunt of Coursicana TX, Debra (Bob) Carter of Prairie City, Delbert Seward of Prairie City, and Clifford Seward of Abingdon; thirteen grandchildren, thirty-two great-grandchildren, and three great-great-grandchildren. She was preceded in death by her father; husband; four sons, Harmey E. Miller, Leroy G. Owens, Jr., Edward W. Owens and Anthony H. Wagher, a sister, Gloria; three brothers-in-law, Satch, Robert and Roger; and a sister-in-law, Linda. Mary attended Carl Sandburg College and Knox College. She worked in dietary at Carl Sandburg College and Seminary Estates. She loved to cook and bake. She was known as the “Cookie Lady.” Mary also loved to watch cooking shows and crafts. Most of all, Mary loved spending time with and taking care of her family, especially her grandkids. Her grandchildren were the apple of her eye. Visitation will be held from 1-2:30 pm on Friday, July 24, 2020 at Hurd Hendricks Funeral Homes and Crematory, Knoxville. Following visitation, Graveside services will be held at Trenton Cemetery, Rural Dahinda, Illinois on Friday at 3 pm. Memorials may be made to the family. Online condolences may be left to the family at www.hurdhendricks.com.

Mary J. Wagher, 81, of Abingdon, formerly of Dahinda, passed away peacefully at home with her family at her side on Tuesday, July 21, 2020 at 2:14 AM. Mary was born on September 30, 1938 in Lewistown. She was the daughter of Harmey and Anna... View Obituary & Service Information

The family of Mary J. Wagher created this Life Tributes page to make it easy to share your memories.

Send flowers to the Wagher family.