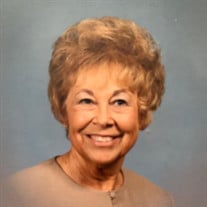 Galesburg - Mary Lou Kimball, 91, died Saturday, July 31, 2021 at Knox County Nursing Home, Knoxville, IL where she had been a resident since the end of March. Mary Louella Becker was born in Plattsmouth, Nebraska on July 1, 1930 to Earl and... View Obituary & Service Information

The family of Mary Lou Kimball created this Life Tributes page to make it easy to share your memories.

Send flowers to the Kimball family.