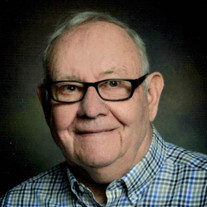 Marvin J. Gustafson, a kind, wise, lifetime farmer of gentle humor, enjoyed life from Wednesday, June 27, 1934 until Monday, February 17, 2020. He was 85 years old. Marvin was born on the family farm in Persifer Township, the son of Conrad “Connie” and Geneva (England) Gustafson. He was reared and educated in Knoxville, graduating from Knoxville High School in 1952. On September 13, 1953, Marvin married Claudette Martin at Grace Lutheran Church in Knoxville. They were married for sixty-six years. She survives; along with their daughter, Julie (Richard) Patch of Galesburg, Illinois; and son, John (Patty) Gustafson of Galesburg. He had four grandchildren: Natalie (Peter), Tracy (Erik), Travis, and Alex; and six great-grandchildren: George, James, Taylor, Oliver, Zane, and Ava. Also surviving are Marvin’s sister, Donna (Jack) Bruns of Garden City, Kansas; and brother, Willard (Etheline) Gustafson of Galesburg. Marvin was a pork producer and grain farmer his entire career. He was also a salesman for Pioneer Hi-Bred for twenty-five years. He was an enthusiastic private pilot and he enjoyed traveling, especially wintering in New Braunfels, Texas. He enjoyed his fishing trips to the family cabin in Bemidji, Minnesota. He also loved playing cards with his friends. He was a member of the Knox County Pork Producers, the Knox County Farm Bureau, and was on the First Midwest Bank Board of Directors. He dedicated time to his church, Grace Lutheran, in many positions. The family would like to thank Hospice Compassus for the care and support given to Marvin. Cremation was accorded, with a private family service to be held at Grace Lutheran. Friends are welcome to join the family to celebrate Marvin’s life at Hidden Hills Winery in Knoxville, Illinois from 11:30 A.M. to 2:30 P.M., on Saturday, February 22, 2020. In lieu of flowers, memorials may be made to the Grace Lutheran Church of Knoxville, the Galesburg Rescue Mission, or the Mayo Clinic Alzheimer’s Research Fund.

The family of Marvin J. Gustafson created this Life Tributes page to make it easy to share your memories.

Send flowers to the Gustafson family.