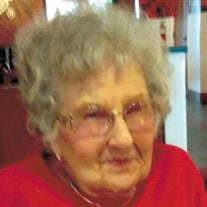 Margaret L. “Peggy” LeStarge, age 97, died at 3:06 A.M. on Sunday, June 7, 2020 at Seminary Manor, Galesburg, Illinois. She was born on December 21, 1922 in Chicago, Illinois the daughter of John and Estelle McLain. She graduated from Steinmetz High School in Chicago, Illinois. She married Robert J. LeStarge in April 1941. He preceded her in death in 1999 after 57 years of marriage. Surviving is a daughter, Linda L. (and Jay) Rhodes of Illinois. Four grandchildren: Julie of Iowa, Kathie of Texas, Susan of Illinois and Mike of Texas; nine great-grandchildren: Zachary of Iowa, Luke of Colorado, Brady of Texas, Hayden of Texas, Noah of Illinois, Beau of Texas, Brooke of Texas, Gracie of Illinois and Maryn of Texas. She preceded in death by her parents, husband and one son, Thomas L. LeStarge in 2004. Margaret was a wonderful wife, mother, and grandmother. She worked for Illinois Bell Telephone. She was a member of Mount Calvary Lutheran Church in Galesburg Illinois. She was an avid golfer, enjoyed card games, especially BRIDGE. Cremation rites have been accorded. Inurnment will take place at Curlew Hills Memory Gardens in Palm Harbor, Florida.

The family of Margaret L. LeStarge created this Life Tributes page to make it easy to share your memories.

Send flowers to the LeStarge family.