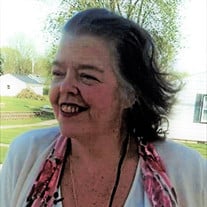 M. Ann Gardner-Marull, age 56, of Galesburg, Illinois, died at 1:25 P.M. on Wednesday, August 1, 2018 at the Galesburg Cottage Hospital in Galesburg surrounded by her family and friends. Ann was born on December 25, 1961 in Monmouth, Illinois, the daughter of Wilbur and Rosemary (Lee) Gardner. She graduated from Galesburg High School in 1980, and then attended Monmouth College, where she received her Bachelor Degree in Arts. She married Enrique Marull on May 24, 2004 in Galesburg. He preceded her in death on July 17, 2014. Surviving is a daughter, Amanda (Jesse) Saylor of Galesburg; a step-daughter, Emerald Marull of Galesburg; one sister, Francis Seidher of Tennessee; one brother, Irish (Faye) Gardner of Hollywood, Florida; two nephews; two special friends: Tina Braun and Dick Lyons; other relatives; and many friends. She was preceded in death by her parents; husband; and one brother, Jim. She worked as a substitute teacher for the Knox and Warren County areas for many years and was a member of St. Patrick’s Catholic Church and the Altar & Rosary Society. A Funeral Mass will be held at 10:00 A.M. on Tuesday, August 7, 2018 at St. Patrick’s Catholic Church in Galesburg, Illinois, Fr. William T. Miller officiating. Visitation will be from 5:00 P.M. to 7:00 P.M. on Monday, August 6, 2018 at the Hurd-Hendricks Funeral Home & Crematory in Knoxville, Illinois, with a recital of the Rosary at 5:00 P.M. Interment will be at St. Mary’s Cemetery in Monmouth, Illinois. Memorials may be made to the family.

M. Ann Gardner-Marull, age 56, of Galesburg, Illinois, died at 1:25 P.M. on Wednesday, August 1, 2018 at the Galesburg Cottage Hospital in Galesburg surrounded by her family and friends. Ann was born on December 25, 1961 in Monmouth, Illinois,... View Obituary & Service Information

The family of M. Ann Gardner-Marull created this Life Tributes page to make it easy to share your memories.

Send flowers to the Gardner-Marull family.