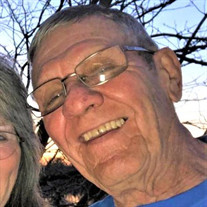 Louis Friend, Jr., age 78, of Abingdon, Illinois, died at 11:55 A.M. on Sunday, October 13, 2019 at home with his family by his side. He was born January 13, 1941 in Joliet, Illinois, the first child of Louis L. and Irene (Krall) Friend, Sr. He married Donna Plym and together they had a daughter, Christi. They later divorced. He later married Greta Roe and together they had his only son, Bart. They later divorced. He then married June Poulson and together they had his youngest daughter, Amanda. They, too, later divorced. Louis then met Bonnie Hankins and they were married in 1996 and he cared for Bonnie at home until her death on June 4, 2007. He was also preceded in death by his parents: Louis L. and Irene Friend, Sr.; brother-in-law, Ernie Watters; nephew, Todd A. Friend; and multiple extended family and friends. By his own words of recent, he’d had “a full life of good health, being very fortunate to enjoy life to its fullest in all aspects of God’s path for him.” He was active and independent, never giving in to his stoic battle with cancer, up until the last two weeks of his life. He graduated from Galesburg High School and attended Carl Sandburg College for two years. Louis then joined the United States Marine Corp and was stationed at Marine Corp Air Station, Kaneohe Bay, Oahu, Hawaii for four years. When he returned, he worked for BNSF Railroad in the bridge and building/ water department for forty years until his retirement… but he didn’t stop there. He continued to work and had his own lawn service, taking pride in doing a good job and doing it right. He often stated, “When I have to give up my mowing, then I’m done.” Everyone who knew him well understood what he meant. Louis worked all his life, but also took time to live life. His love for the outdoors was endless, not only mowing, but fishing on the Fox River with his son and Uncle Johnny. Other past times he enjoyed included gambling as well as bowling, which he did for over fifty years and met many long-time friends. He bowled on multiple leagues and tournaments throughout the United States, and bowled a perfect 300 game at Abbe Lanes in 2015. His best friend and companion, his dog, Abbe, was named after Abbe Lanes. She will miss him. He loved animals, cooking for many neighborhood dogs, friends and family; he enjoyed the bond of food and comfort. For many years, at Thanksgiving and Christmas, he would purchase multiple hams and turkeys and deliver them to many families. He also cooked and delivered food for many that were ill or homebound so that they, too, could enjoy the comfort of a home cooked meal. Louis was never without a good joke, having an endless sense of humor, and he loved watching sports of all types, although he particularly enjoyed golf and the Cubs. He loved having great fish frys and conversations with all. He was stubborn and opinionated and that’s okay, because that’s who he was. He was a member of the American Legion Post #381 and a life time member to many charitable entities. Louis is survived by his children: Christi Syron of Galesburg, Bart Friend of London Mills, Illinois, Amanda (and Lattney) Jones of Pima, Arizona; three grandchildren: Savannah June and Kennedy Jade Jones of Pima, Arizona, and Clayton Michael Friend of London Mills. Louis is also survived by his seven siblings, all of Galesburg: Sandy Watters, Les (and Helen) Friend, Karen (and Les) Baker, Ronnie (and Linda) Friend, Nina (and Stephen) Smith, Debbie (and Dave) Marty, Monica (and Robert) Inness; as well as multiple nieces; nephews; cousins; aunts; uncles; step-children; and extended family. He is also survived by special friends Chris Callies, Mike Tabb, Uncle Johnny, Zan and Connie Carter, and many neighbors. Cremation rites will be accorded. Visitation will be held on Tuesday, October 22, 2019 from 9:00 A.M. to 12:00 P.M. at the Hurd-Hendricks Funeral Home & Crematory in Knoxville, Illinois. The memorial service will be held on Tuesday, October 22, 2019 at 12:30 P.M. at the funeral home. Interment will be at the Henderson Cemetery in Henderson, Illinois. Military rites will be conducted by the Abingdon American Legion Post #381. Memorial contributions may be made to Clayton Friend, care of Bart Friend.

The family of Louis Friend, Jr. created this Life Tributes page to make it easy to share your memories.

Send flowers to the Friend, family.