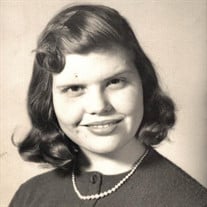 Loretta J. Hayes, age 78, of Galesburg, Illinois, died at 1:55 P.M. on Saturday, January 25, 2020 at the OSF Saint Francis Medical Center in Peoria, Illinois. She was born on August 13, 1941 in Galesburg, the daughter of Jesse and Murel (Arie) Young. She grew up in the Galesburg area, creating many wonderful memories and lasting friendships. She graduated from Galesburg High School with the class of 1959, which was the last class to graduate from the old building. On April 21, 1962, Loretta was joined in marriage to Lawrence E. Hayes at the First Church of God in Galesburg. Left to cherish Loretta’s memory is her loving husband of fifty-seven years, Lawrence E. Hayes of Galesburg; their two children: Laura C. Hayes of Galesburg, Lenore M. Hayes of Galesburg; one grandson, Samuel L. Karjala of Knoxville, Illinois; and a very dear friend, Tracey Shimmin of Galesburg. She was preceded in death by her parents; her brother: Jesse (Pete) Young, Jr.; her sister, Lisa A. Gable; and infant brother, Lyle A. Young. Loretta worked in the lunchroom of Silas Willard School, and then worked in the kitchen of the former Rosewood Care Center. She was a member of her beloved church, the First Church of God in Galesburg, and was especially active in the church youth group. There were many past times that she enjoyed, but she especially loved to paint, and was a talented artist. In fact, there was not a crafting activity that Loretta had tried that she did not enjoy, and she also liked to sew. She had a room in her house dedicated to Abraham Lincoln; she was an amateur Abraham Lincoln historian, and was very enthusiastic in sharing her knowledge about her favorite president. Loretta will be remembered for her ability to never meet a stranger. She was a loving, bright person with a warm personality, and she will be missed by all who knew and loved her. Cremation rites will be accorded. Visitation will be held on Saturday, February 1, 2020 from 10:00 A.M. to 11:00 A.M. at the Hurd-Hendricks Funeral Home & Crematory in Knoxville. A memorial service will directly follow at 11:00 A.M., Rev. Dennis J. McQuown officiating. Memorial contributions may be made to Saint Jude Children’s Research Hospital or to the FISH Food Pantry.

Loretta J. Hayes, age 78, of Galesburg, Illinois, died at 1:55 P.M. on Saturday, January 25, 2020 at the OSF Saint Francis Medical Center in Peoria, Illinois. She was born on August 13, 1941 in Galesburg, the daughter of Jesse and Murel (Arie)... View Obituary & Service Information

The family of Loretta J. Hayes created this Life Tributes page to make it easy to share your memories.

Send flowers to the Hayes family.