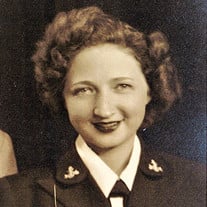 Lila R. Cecil, age 96, of Knoxville, IL, died at 1:32 A.M. on March 14, 2018 at the Marigold Rehabilitation & Healthcare Center in Galesburg, IL. She was born on September 2, 1921 in Minot, ND, the daughter of Russell X. and Clara L. (Smith) Cecil. She attended McGirr School in Maquon Township, IL, and graduated from Maquon High School. She later attended the Peoria Institute of Business in Peoria, IL. Lila is survived by three siblings: Beverly Cecil of Knoxville, IL, Robert Cecil of Knoxville, IL, Jay Cecil of Knoxville, IL; and many nieces and nephews. She was preceded in death by her parents; one sister, Lena Gooding; and three brothers: Kenneth, Bernard, and Burton. She worked for the Rock Island National Cemetery in Rock Island, IL, then moved to Long Beach, CA, where she worked for the California Shipbuilding Company, building ships for the Navy. She joined and served in the United States Navy from May of 1943 to February of 1946 and received the American Campaign Ribbon and the Victory Ribbon in recognition of her service during World War II; during her service in the Navy, she worked as a secretary for the Department of the Navy in Washington D.C. After her service, she worked in Cheyenne, WY, then in Las Vegas, NV for Catalytic Construction Company bomb testing site. She finally worked as a secretary for the International Paper Company in Peoria, IL, where she retired after being employed for fourteen years. Lila was a member of the Harry Philblad American Legion Post #749 in Knoxville, IL. Visitation will be held from 2:00 P.M. to 3:00 P.M. on Sunday, March 18, 2018 at the Hurd-Hendricks Funeral Home & Crematory in Knoxville, IL. The memorial service will immediately follow at 3:00 P.M. Inurnment will be held at a late date at the Rock Island National Cemetery in Rock Island, IL. Memorial contributions in Lila’s honor may be made to Galesburg Library or the Maquon Library. On-line condolences and expressions of sympathy may be made through www.hurd-hendricksfuneralhome.com.

The family of Lila R. Cecil created this Life Tributes page to make it easy to share your memories.

Send flowers to the Cecil family.