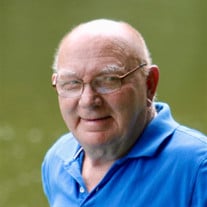 LeRoy F. “Red” “Lee” Ingle, age 78, of Galesburg, Illinois, died at 7:13 A.M. on Tuesday, September 17, 2019 at his home. He was born on Saturday, March 1, 1941 in Toulon, Illinois, the son of Richard and Darlene (Frail) Ingle. He was reared and educated in the Knox County area, attending R.O.V.A. schools. On Saturday, June 20, 1959, LeRoy was joined in marriage to Donna R. Faurot in Victoria, Illinois at the Victoria Methodist Church. Left to cherish LeRoy’s memory is his loving wife of sixty years, Donna Ingle of Galesburg; their three children: Greg (and Jolene) Ingle of Victoria, Illinois, Susi (and Neil) Taylor of Maquon, Illinois, Lisa (and Jim) Towlerton of Burlington, Iowa; one son-in-law, Thomas Medina of Galesburg; eight grandchildren: Dusty (and Natalie) Ingle, Devin (and Jill) Stowe, Jay Doubet, Austin Taylor, Courtney Taylor, Mattie Taylor, Sami Doubet, Eli Medina; three great-grandchildren: Avery Ingle, Bennett Ingle, Rhett Stowe; and his three siblings: Richard “Louis” (and Janet) Ingle of Oneida, Illinois, Vicki Weedman of Galesburg, and Paula Arnao of Tampa, Florida. He was preceded in death by his parents; and daughter, Amy R. Medina. LeRoy owned and operated Ingle Excavating for over twenty-seven years. He later went on to work for another eighteen years for the Knox County Housing Authority, until his retirement. He was an active and dedicated member of the Oaks Community Church, as well as an active member of the Witness Cross Team. There were many past times that he enjoyed, but none so much as spending quality time with his family and friends. He had a wonderful sense of humor and was a loving husband, father, grandfather, great-grandfather, brother, and friend; he will be greatly missed by all who knew and loved him. Cremation rites will be accorded. A memorial service will be at 10:00 A.M. on Saturday, September 21, 2019 at the Oaks Community Church in Dahinda, Illinois, Rev. Marty Briney officiating. In-lieu of flowers, memorial contributions may be made to the Oaks Church Youth.

The family of LeRoy F. Ingle created this Life Tributes page to make it easy to share your memories.

Send flowers to the Ingle family.