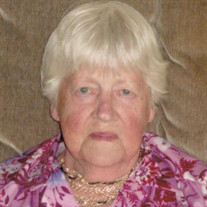 L. Alwanda Cooley, age 97, of Knoxville, Illinois died at 8:02 A.M. Friday, March 13, 2020 at her home in Knoxville, Illinois. She was born on May 30, 1922 in Cameron, West Virginia the daughter of David E. and Etta O. (McIlvain) Clark. She married Earl Cooley on May 18, 1943 in Vancouver, Washington. He preceded her in death on February 6, 1995. She is survived by three daughters: Betty Cooley of Knoxville, Illinois, Vicki Weatherd of Poulsbo, Washington, and Janet (Jess) Godsil of Galesburg, Illinois; seven grandchildren, ten great grandchildren, and two great-great grandchildren. She was preceded in death by her parents, husband, one great grandson; eight brothers and sisters. She worked for the former Admirals/Maytag and the former Protexall both of Galesburg, Illinois. She was a member of the Knoxville Christian Church in Knoxville, Illinois and the VFW Auxiliary. She was a world traveler, she enjoyed gardening, puzzles and playing cards. Visitation will be held from 10:00 A.M. – 11:00 A.M. on Tuesday, March 17, 2020 at the Hurd-Hendricks Funeral Homes & Crematory in Knoxville, Illinois with a Graveside Service at 11:30 A.M. at Oak Lawn Memorial Gardens in Galesburg, Illinois. Revs. David Shreeves and Katie Gallagher officiating. Interment will be in Oak Lawn Memorial Gardens, Galesburg, Illinois. Memorial contributions may be made to the American Heart Association, American Cancer Society, or to the Knox County Nursing Home Alzheimer’s Memory Walk. Online condolences and expressions of sympathy may be made through www.hurd-hendricksfuneralhome.com.

The family of L. Alwanda Cooley created this Life Tributes page to make it easy to share your memories.

Send flowers to the Cooley family.