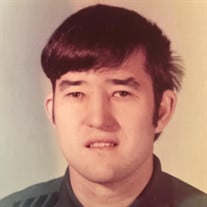 Keith W. King, age 72, of Phoenix, Az, formerly of Knoxville, Il died on Tuesday, August 11, 2020 at 7:45 a.m. at Hospice of the Valley in Glendale, Az. He was born on December 17, 1947 in Litchfield, Il, the son of John and Esther King. Surviving are one brother, Kirk (Melanie) King, one niece, Jennifer Rasso of Peoria, Az, and one nephew Kellen (Katherine) King of Phoenix, Az and two great nieces, Brynlee and Emmalynn Rasso. He was preceded in death by his parents. At the age of 10 years, Keith attended Sunnyside School for the developmentally disabled in Galesburg, Il. He attended this school until he began vocational work at a center for special needs clients in Galesburg known as Knox County Council for Developmentally Disabled (KCCDD). He retired at the age of 45. From 2007 to 2010, after the death of his parents, Keith lived in a care residence in Galesburg, Il known as Stevens House. Most recently, Keith lived at a group home near his family in Phoenix, Arizona (Sienna Vista – Hacienda Healthcare), where he had been a resident for six years. Keith was a lifelong fan of Knoxville High School Sports. His love for the Blue Bullets teams began in the 1950’s when he was a young boy and carried through countless ballgames over a 60 year span. He was a devoted member of Grace Lutheran Church in Knoxville, Il. Keith was a quiet, caring man who was well-liked by his peers and caretakers. He set an example with his humble kindness. He will be greatly missed by all who loved him. Private graveside services will be held on Friday, September 4, 2020 at the Knoxville Cemetery, Knoxville, Il with the Rev. Tucker O’Leary officiating. Memorials may be made to the Grace Lutheran Church. Hurd-Hendricks Funeral Homes & Crematory has been entrusted with local arrangements. On-line condolences or expressions of sympathy may be made through www.hurd-hendricksfuneralhome.com.

The family of Keith W. King created this Life Tributes page to make it easy to share your memories.

Send flowers to the King family.