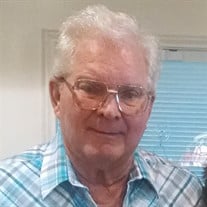 Keith George Durdle, 77, of Maquon, passed away Tuesday, January 8, 2019 at 11:55 A.M. at the Knox County Nursing Home in Knoxville, Illinois. He was born at St. Francis Medical Center in Peoria, Illinois on May 31, 1941, the son of George C. and Marguerite (Emken) Durdle. He married Diane L. (Wooddell) on September 14, 1996 in Galesburg. She survives. Also surviving are his four sons, Mitch (Beth) Durdle of Galesburg, Tim (Diane) Durdle of Oak Run, Troy (Nancy) Durdle of Roseville, Daniel (Sammi) Durdle of Maquon; three stepchildren, Roxanne (Tony) Hahn of Jerseyville, Dennis (Lynn) Spangler of Hanford, California, and Anthony (Adrianna) Stewart of Canton; 17 grandchildren and 8 great-grandchildren; one sister, Marilyn (Clint) Cannon of Punta Gorda, Florida and a host of nieces and nephews. And his beloved dog Max. He was preceded in death by his parents and one grandchild. Keith graduated from Spoon River Valley in 1959. After graduation Keith worked at Butlers and Gates Rubber Company for a short time before focusing on the family farm, retiring in 2012. Keith enjoyed going to drag races in Cordova, attending auctions, and Old Thresher’s Reunions. He loved spending time with family and friends at pot lucks. Visitation will be held on Sunday, January 13, 2019 from 2:00 P.M. to 4:00 P.M. at the Hurd-Hendricks Funeral Home in Knoxville. The funeral service will take place at the St. Paul Lutheran Church in Brimfield on Monday, January 14, 2019 beginning with an hour visitation from 10:00 A.M. to 11:00 A.M., the funeral service will directly follow at 11:00 A.M. Interment will be at the Yates City Cemetery. Pastor Michael Liese will be officiating the services. Fellowship will be after the graveside services at the Yates City Community Center. Memorial contribution may be left to the Maquon Fire and Ambulance or to St. Paul Lutheran Church. Online condolences can be made at www.hurd-hendricksfuneralhome.com

Keith George Durdle, 77, of Maquon, passed away Tuesday, January 8, 2019 at 11:55 A.M. at the Knox County Nursing Home in Knoxville, Illinois. He was born at St. Francis Medical Center in Peoria, Illinois on May 31, 1941, the son of George C.... View Obituary & Service Information

The family of Keith George Durdle created this Life Tributes page to make it easy to share your memories.

Send flowers to the Durdle family.