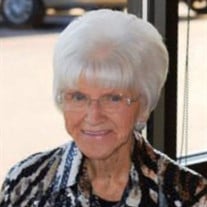 June (Headley) Chezum of Galesburg, Illinois entered into heaven at 10:10 P.M. on Tuesday, May 14, 2019. She was met by her Husband, Don; 3 Sisters - Phyllis (Lavirn) Stisser, Virginia (Joe) Zeier, Ferne (Pete) Wickliff; 2 Brothers - Bud (Betty) Headley, Clifford Headley; and, Parents - Howard and Winnie (Ahlgren) Headley. June was born on June 10 in Bishop Hill, Illinois. She graduated from Fairfield High School in Fairfield, Iowa and was later married to Donald “Don” Chezum on November 27, 1947 in Fairfield, Iowa. Shortly after marrying, the young couple moved from Iowa to Oklahoma, to Indiana and then to Illinois where she, along with husband, Don, built their own home in Knoxville, Illinois. June had several jobs over the years including Dental Hygienist in Galesburg, Illinois. She was a member of the Knoxville United Methodist Church, member of the Junior Women’s Club and was very active in the community including volunteering at Galesburg Cottage Hospital and at the election polls. June enjoyed many things in life including a love of decorating and playing bridge in one of the seven bridge clubs she belonged to. June is survived by daughter, Tammy (Keith) Moore of Allen, TX; 2 Grandchildren – Kristopher Moore of San Antonio, TX and Kelsey Moore of Frisco, Texas; 1 Great-Grandchild, Kinsley Peacock; and several nieces and nephews. Memorial Services will be held on Sunday, May 26, 2019 at 2:00 P.M. at the Hurd-Hendricks Funeral Homes & Crematory in Knoxville, Illinois. Rev. Jordan Knight will be officiating. There will be no visitation. Inurnment will be at the Knoxville Cemetery in Knoxville, Illinois. In lieu of flowers, the family requests memorials to be made to the Juvenile Diabetes Research Foundation (JDRF) or a memorial of your choice.

The family of June Chezum created this Life Tributes page to make it easy to share your memories.

Send flowers to the Chezum family.