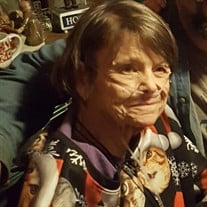 Not sure what to send?

Judith A. "Judy" Board

Judith A. “Judy” Board, 66, of Toulon passed away at home on Thursday, December 30, 2021 with her children at her side and spent the day prior with her son, daughter and grandson, Draven. Judy was born on July 10, 1955 Hinsdale, Illinois. She was the daughter of Harold and Rita (Czerwinski) Somerfield. Judy married Wendell Drummond on June 6, 1974 in Clariton Hills. She later married Rick Board on October 25, 1987 in Westmont. Judy is survived by her children, Jason L. Drummond of De Pue and Amanda (Aaron) Hight of Bradford; six grandchildren, Jakob H. Drummond, Draven Crain-Drummond, Nathan T. Hight, Jessica O-M Hight and Elizabeth I-M Hight; one great-granchild, Ethan Crain; and a sister, Pamela Fisher of Orafino, Idaho. She was preceded in death by her parents, brother, David and sister, Sandra Sue. Judy was a graduate of Hinsdale Central Highschool. She worked as a cashier and bus driver. Judy was a member of the First Baptist Church of Bradford. She loved to craft, crochet, play cards and play with her cats. Judy was a self-sacrificing woman who would constantly put others needs before her own. She loved spending time with her family, especially her grandchildren. Most importantly, Judy was a 27-year survivor of a Double Lung Transplant, the longest living survivor to date. Cremation rites have been accorded. A celebration of life will be held from 2-5 PM on Saturday, January 29, 2022 at the First Baptist Church, 111 Bonita Ave., Bradford, IL 61421. Hurd-Hendricks Funeral Homes & Crematory have been entrusted with arrangements. Memorials may be donated to Autism Speaks, the Wounded Warriors Project, the SAMHSA Organization, or donate to your local police department in Judy’s honor. On-line condolences and/or expressions of sympathy may be sent through www.hurd-hendricksfuneralhome.com

The family of Judith A. "Judy" Board created this Life Tributes page to make it easy to share your memories.