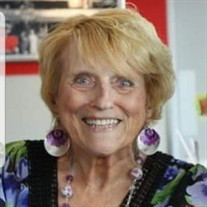 Joyce E. Webb, age 81, of Monmouth, Illinois died at 7:25 P.M. on Sunday, October 25, 2020 at her daughter’s home in Cambridge, Illinois. Joyce was born on May 31, 1939 in Galesburg, Illinois the daughter of Ray and Annie Bell (Bybee) James. She attended and graduated from Knoxville High School the class of 1957. She married Larry L. Webb in 1957 in Cambridge, Illinois. Surviving are her children: Leah (Jerry) McLaren of Valdosta, Georgia, Denise Gustafson of Galesburg, Illinois, Karen (Pat) Sall of Cambridge, Illinois, Stephanie (Jim) Kinkaid of Gerlaw, Illinois and William (Devon) Webb of North Little Rock, Kansas; 15 grandchildren, and 22 great grandchildren. Also surviving are her siblings: Rama (David) Hodam of Eldridge, Iowa and Larry (Sonja) James of Washington, D.C. She was preceded in death by her parents, her step-mother, Jeannie James, her step-father, James Kling, her husband, her daughter Diane Klein, a sister, Sharon Leonardson, grandson, Waylon Clark, and a great-granddaughter, Hope Gustafson. She worked for Eagles foods for sixteen years, and Baird Insurance in Williamsfield, Illinois. She was a member of the United Methodist Church in Dahinda, Illinois. Cremation rites have been accorded. Internment will be at a later date. Memorials may be made to the Dahinda United Methodist Church. On-line condolences or expressions of sympathy may be made through www.hurd-hendricksfuneralhome.com.

The family of Joyce Webb created this Life Tributes page to make it easy to share your memories.

Send flowers to the Webb family.