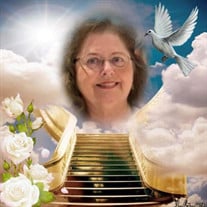 Joyce Smith-Murphy of Tallula, Illinois formerly of Bedford, Texas began her new life journey with Jesus on July 19, 2020. Joyce was born on November 20, 1946 in Galesburg, Illinois to Guy E and Laura Smith who preceded her in death in 1999 and 2002. Joyce shared her childhood in Alexis, Illinois with her parents and 3 siblings; Brother Richard Smith (preceded her in death on November 2, 2015; Sister Jan Carlson-Owens of Henderson, Illinois, and baby brother David Smith (Davy) of San Diego, California. She married Richard F. Simmons in 1968, and they moved to Irving, Texas in the 70’s then to Grapevine, Texas in the early 80’s. She worked for a mortgage company in Dallas, Texas as an executive secretary until 1991. Her favorite part of the job was planning the parties. In 1991, she started working for process automation in Grapevine, Texas as a Secretary. Her husband passed away on February 3, 1993. Joyce continued living in Texas and continued working for process automation Inc. as the administrative assistant when the company moved to Hurst, Texas. In the late 90’s she moved to Bedford, Texas to be closer to her favorite niece Chris aka Texas daughter. Joyce retired from Process Automation, Inc. in 2016, it was then that she moved to Tallula, Illinois to be closer to her sister Jan. She always said; no matter where I go I will be back to Texas, Texas is my home. She enjoyed Country dancing, hip hop, karaoke, spending time with family, watching airplanes, and attending mass. Joyce was a big ray of sunshine to all who knew her; she was fun, loving, and full of humor. She is survived by; her Sister Jan, baby Brother Davy, her friend and roommate for 20 years Phillip Allbritton (Phil called her his little muffin), favorite niece aka Texas Daughter Chris Martin (Kyle Wheeler) of Texas, niece’s Linda Smith (Carl Collins), Tammy Faul (Jeff) both of Tallula, Illinois. Nephews: Jim Carlson (Pam) of Clarksdale, Missouri, James Carlson (Vickie) of Arkansas, John C Carlson of Florida, Tim Smith, Terry Hess (Tammy), Chuck Hess (Lynette) all of Illinois. Great niece’s; Amber Manseill of Texas, Chasity, Chris, Nikki, Brittany, Amanda, Meghan, and Kelsy all of Illinois. Great Nephews; Shawn Guest of Texas, PVT 1st Class Wheeler, Dayton of N. Carolina, Dalton Wheeler of Texas, Michael Carlson, Kaleb Carlson, Russell Trautwein, Kyle Trautwein all of Missouri, Chris Collins (Jenelle) of Illinois, Great- Great niece’s; Serenity Manseill, Erian Shearon, Sara Guest all of Texas, Great- Great nephew’s; Wyatt Guest of Texas ( Joyce called him Buster), Cameron, Thomas, and Gavin Carlson of Missouri, and several other great- great nieces and nephews, and lots of friends. Joyce was also preceded in death by her brother in law Donald Owens (they called each other Pork), and her two papillon fur babies Saylor and Sparkey. Joyce Smith-Murphy lived and loved to the fullest. A celebration of life will be scheduled in Grapevine, Texas at a later date. If you would like to donate to the celebration of life, they may be sent to Chris Martin, 6817 Arborbrook Drive., North Richland Hills, Texas 76182 On-line condolences or expressions of sympathy may be made through www.hurd-hendricksfuneralhome.com

Joyce Smith-Murphy of Tallula, Illinois formerly of Bedford, Texas began her new life journey with Jesus on July 19, 2020. Joyce was born on November 20, 1946 in Galesburg, Illinois to Guy E and Laura Smith who preceded her in death in 1999... View Obituary & Service Information

The family of Joyce Smith-Murphy created this Life Tributes page to make it easy to share your memories.

Send flowers to the Smith-Murphy family.