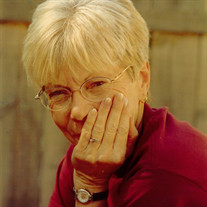 Joyce I. Reed, 80, of East Galesburg, passed away on Wednesday, December 8, 2021, 1:54 AM at Toulon Rehabilitation and Health Care Center, Toulon. Joyce was born on July 6, 1941 in rural Williamsfield, Illinois. She was the daughter of Dale “Nick” and Nina (Dexter) Brown. Joyce married the love of her life, Albert Kenneth “Kenny” Reed on August 20, 1983 in East Galesburg. She is survived by her loving husband, Kenny at home; children, James “Jimmy” Brown and Robert R. “Bobby” Miner, Jr., both of Galesburg, Randy (Michelle Clemens) Reed of Rockford, Paulette (Chris) Welty and Roger (Janice) Reed, both of Louisiana and Rick (Lisa) Reed of Knoxville; grandchildren, Kasey, Madison, Victoria, Matthew, Ashley, Eric, Cameron, Rhya, Katarina, Jesse, David, Nichole, Aaron, Kristopher, Ryan, Lindy, Blake, Joshua and Ashley; siblings, Larry (Corrine) Brown of Davenport and Dale Brown of Galesburg; and several great-grandchildren and “the light of her life” Lucky the dog. She was preceded in death by her parents; a daughter, Shelley Miner; and brothers Arthur and Warren Brown. Joyce was a 1959 graduate of Knoxville High School. She was the Village Clerk of East Galesburg for several years before retiring. She loved gardening, dancing, motorcycling. Joyce really enjoyed working and was always busy doing one task or another. Most of all, Joyce loved her family and spending time with them. Cremation rites have been accorded. A celebration of life will be held at a later date. Memorial contributions may be made to the family. Hurd-Hendricks Funeral Homes and Crematory, Knoxville have been entrusted with arrangements. On-line condolences and/or expressions of sympathy may be sent through www.hurd-hendricksfuneralhome.com

Joyce I. Reed, 80, of East Galesburg, passed away on Wednesday, December 8, 2021, 1:54 AM at Toulon Rehabilitation and Health Care Center, Toulon. Joyce was born on July 6, 1941 in rural Williamsfield, Illinois. She was the daughter of Dale... View Obituary & Service Information

The family of Joyce I. Reed created this Life Tributes page to make it easy to share your memories.

Send flowers to the Reed family.