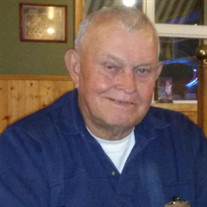 Joseph A. West, age 80, of London Mills, Illinois died at 7:41 A.M. on Monday, November 23, 2020 at his home in London Mills, Illinois. He was born on March 8, 1940 in Knox County, Illinois, the son of Ronald and Ruth (Swanson) West. He attended and graduated from Knoxville High School, the class of 1958. He married Donna C. Fox on April 17, 1960 in Knoxville, Illinois. Surviving are his children: Bruce T. West of Kewanee, Illinois, Joleen A. (John Eckler) West of St. Charles, Illinois, Doug T. (Eileen Vavricek) West of Chicago, Illinois; four grandchildren: Jeremy Burright of Woodstock, Illinois, Joseph “J.D.” West of Macomb, Michigan, Nia-Imani Davis of Chicago, Illinois, and Sai Vavricek of Chicago, Illinois; two great-grandchildren: Ayden West and Nikoli West. He was preceded in death by his parents, four brothers: Oley, Ronald “Budge”, John, and Theodore West; three sisters: Doris, Marilyn, and Lois May. He was a farmer outside of Maquon, Illinois throughout his life until he retired in 2002. He was a former member of the Maquon Masonic Lodge. He enjoyed fishing and taking family trips to Minnesota every year. He was a person who enjoyed simple pleasures and being around family. Cremation Rites will be accorded. Services will be held at a later date. Memorial contributions may be made to the Charity of the Donor’s Choice. On-line condolences and/or expressions of sympathy may be made through www.hurd-hendricksfuneralhome.com

The family of Joseph A. West created this Life Tributes page to make it easy to share your memories.

Send flowers to the West family.