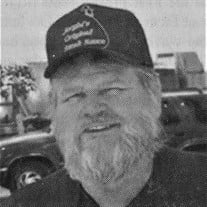 Jorghi Johnson, age 72, of Oneida, Illinois, died at 11:45 P.M. on Wednesday, April 10, 2019 at Generations in Rock Island, Illinois. He was born on December 13, 1946 at St. Mary’s Hospital in Galesburg, Illinois, the son of Vaughn “Sparky” and Jessie (McCormick) Johnson. Jorghi attended and graduated from ROVA in 1965. He was an over-the-road trucker driver, traveling to almost every state in the U.S. He traveled over two million miles without ever having an accident. Jorghi sold food and condiments to area restaurants for many years, and was most famous for his “Jorghi’s Best” Steak Sauce. He loved to cook, and also catered many events in the area. Jorghi umpired locally, both amateurly and professionally. He greatly enjoyed spending time in Alaska. He leaves behind a sister, Trudy Kremer of Oneida; nieces: Kelly Scott of Altona, Illinois and Kristy Swanson of Oneida; nephew, Kraig (Kylie) Pugh of Williamsfield, Illinois; and a special friend, Shannon Reynolds of Galesburg. He was preceded in death by his parents; and one brother, Dennis Johnson. Cremation rites will be accorded. Visitation will be held from 2:00 P.M. to 5:00 P.M. on Sunday, April 14, 2019 at the Hurd-Hendricks Funeral Home in Oneida, Illinois. A short memorial service will directly follow the visitation, Rev. Tim Anderson officiating. Memorial contributions may be made to the Oneida American Legion Post, the Elks Lodge #894, or the Oneida Post 727 Legion Baseball.

The family of Jorghi Johnson created this Life Tributes page to make it easy to share your memories.