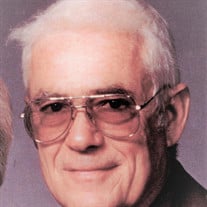 John W. “Johnny” Pickel, age 93, of Gilson, Illinois died at 11:30 P.M. on Monday, September 7, 2020 at his home in Gilson, Illinois. John was born on September 24, 1926 in Galesburg, Illinois the son of Earl E. and Roxie M. (Waymack) Pickel. He married Eunice J. McClain on August 13, 1951 in Pocahontas, Arkansas. She preceded him in death on April 25, 2005. Surviving are many nieces and nephews. He was preceded in death by his parents, wife, siblings, and his dog, Blu. He worked for 27 years for the Knox County Department as a truck driver, then he worked for Collopy Trucking, before retiring. He served in the United States Army from 1945 to 1946, during WWII. He received the Asiatic Pacific Campaign Medal, Philippine Independence Ribbon and the Work War II Victory Medal. He was an uncle, neighbor and friend. He was a member of the harry Philblad American Legion Post #794 in Knoxville, Illinois. He loved to garden, woodworking, and he took pride in his flagpole in his yard – it took him 30 years to get it right. He was an avid bird watcher. Private graveside service will be held at the Gilson Cemetery, Gilson, Illinois with Rev. Michael Crummer officiating. Military rites conducted by the VFW/American Legion/AmVets Honor Guard. Memorials may be made to the Knox county Humane Society. On-line condolences or expressions of sympathy may be made through www.hurd-hendricksfuneralhome.com

The family of John W. Pickell created this Life Tributes page to make it easy to share your memories.

Send flowers to the Pickell family.