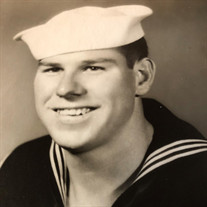 John W. McCarthy, 94, of Galesburg, Illinois passed away Tuesday, August 27, 2019 at 8:15 A.M. at his home in Galesburg. John was born July 22, 1925 in Galesburg, Illinois, the son of Richard J. McCarthy and Mary Ellen Loring. He proudly served his country as a member of the United States Navy, serving aboard the USS Sargent Bay. After the service, he began working for the railroad as a clerk, where he worked for 43 years. John married Barbara J. Duncan on November 2, 1947 at the former Faith United Brethren Church in Galesburg. She preceded him in death on March 10, 2018. He was a lifelong Chicago Cubs fan and enjoyed coaching baseball for many years. John is survived by his 2 children, Cindy J. Nelson of Galesburg, Richard (Lori) McCarthy of Galesburg; 5 grandchildren, Christopher Nelson, Bradley Nelson, Eric (Robin) Nelson, Morgan (Joe) Gorman, Trevor (Laura) McCarthy; 11 great-grandchildren, 6 great-great-grandchildren, and 1 brother, Larry E. McCarthy of Galesburg. He was preceded in death by his wife, parents, 3 brothers, and 2 sisters. Cremation rites are accorded with the Hurd-Hendricks Funeral Home and Crematory in Knoxville, Illinois. Memorial contributions can be made to the charity of donor’s choice.

The family of John W. McCarthy created this Life Tributes page to make it easy to share your memories.

Send flowers to the McCarthy family.