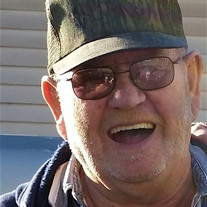 John A. Magnison, 75, of Cameron, Illinois, passed away Friday, May 18, 2018 at 1:45 P.M. at the Kindred Hospital in Peoria, Illinois. John was born March 25, 1943 in Canton, Illinois, the son of Lawrence and Laura (Burkhalter) Magnison. He was a graduate of Galesburg High School. After High School John proudly served his country as a member of The United States Navy. He then married Jackie Meridith on July 3, 1969 in Knoxville, Illinois. He retired from Maytag in Galesburg after 30 years as a Cabinet Repairman. He enjoyed hunting, fishing and cooking on the grill. He especially loved spending time with his grandchildren and his dog “Sam”. John is survived by his wife, Jackie Magnison of Cameron, 2 children, Shelly Morgan of Galesburg, John Magnison of Cameron, 3 grandchildren, Mandi-Jo Morgan, Shaley Magnison, Dakota Magnison, and 1 great-grandchild, C.J. He was preceded in death by his parents, Lawrence and Laura Magnison, and 1 brother, James Magnison. Cremation rites have been accorded with the Hurd-Hendricks Funeral Home and Crematory in Knoxville, Illinois. Memorial contributions may be made to the charity of donor’s choice. Online condolences can be left at www.hurd-hendricksfuneralhome.com

The family of John A. Magnison created this Life Tributes page to make it easy to share your memories.

Send flowers to the Magnison family.