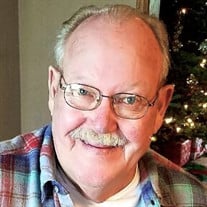 Joel “Joe” Alstedt, age 80, of Galesburg, Illinois, passed away at 9:30 A.M. on Sunday, June 24, 2018 at his home surrounded by family in Galesburg. Joe was born on January 24, 1938 in Alexis, Illinois, the son of Arthur E. and Frances P. (Reem) Alstedt. He married Ruth “Rudy” Ann Hull on February 14, 1976 in Alexis. Surviving is his wife Ruth “Rudy” Alstedt of Galesburg; three daughters: Tammy (Steve) Sagona of Knoxville, Illinois, Tracy (Keith) Robbins of Rio, Illinois, Morine (Brad) Goff of Gilson, Illinois; step-daughter, Denise (Donald) Johnson of Galesburg; and a step-son, Charles (Susan) Johnson of Olathe, Kansas; eleven grandchildren; nine great-grandchildren; a brother, Gene (Kathy) Alstedt of Bloomington, Illinois; and his dog, Katie. He was preceded in death by his parents; two sisters: Mary Lou Leath and Dorothy Larson; two brothers: John and Bill Alstedt; and his beloved dog, Penny. He was a hard-working family man who started at Gates Rubber Company in Galesburg in 1962. He then started at Cardinal Engineering in Cameron, Illinois in 1974 and worked both jobs until he retired from Gates in 1995. He continued working at Cardinal until it relocated. He was a member of the Local USW 685L. His hobbies were driving through car lots, spending time with family, enjoying pizza and ice cream, and going to his grandkids sporting and music events. He was an avid Green Bay Packers Fan. He loved sweets and didn’t know a bakery that he didn’t like and loved sharing his lap and food with his beloved dog Katie. Cremation rites have been accorded with the Hurd-Hendricks Funeral Home and Crematory in Knoxville. A Celebration of Life will be held at a later date. Memorial contributions may be left to the Guardian Angels Humane Society or to the family in care of the funeral home.

The family of Joel "Joe" L. Alstedt created this Life Tributes page to make it easy to share your memories.

Send flowers to the Alstedt family.