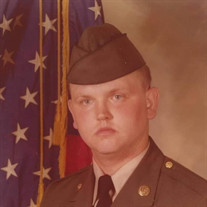 Jimmy Dean Wyman, 64, of Galesburg, passed away at home on Monday, March 14, 2022. Jimmy was born on August 28, 1957 in Galesburg. He was the son of John H. Wyman, Jr. and Linda (German) Reining. Jimmy married the love of his life, Terri L. Sargeant on December 15, 1983 at the chapel at Galesburg Cottage Hospital. Together they celebrated 38 years of marriage. She preceded him in death on February 27, 2022. Jimmy is survived by his daughter, Tanya Wyman of Galesburg; two grandchildren, Jaylynn and Deven; his father and stepmother, John and Deb Wyman, Jr.; siblings, Mike (Jonel) Wyman of Wataga, John (Angelique) Wyman, Sandra (Chuck) Van Duyn, Tony (Amy) Wyman, and Robert (Dawn) Reining all of Galesburg. Along with his wife, he was preceded in death by his mother and brother, Chuck Reining. Jimmy was a graduate of Galesburg High School. He was a veteran of the United States Army. Jimmy worked as a forklift driver on the shipping dock at Smithfield Plant in Monmouth for 25 years, until his retirement. Jimmy enjoyed watching NASCAR races, especially his favorite racer, Jeff Gordon. He was also an avid fan of the Chicago Cubs, Bulls, Blackhawks, the “Fighting Illini” and a die-hard Chicago Bears fan. Jimmy was an avid bowler and had a tradition of attending the Mississippi Valley Fair in Davenport every year. Cremation rites have been accorded. A celebration of life will be held at a later date. Hurd-Hendricks Funeral Homes and Crematory have been entrusted with arrangements. Memorials may be made to the family in care of Hurd-Hendricks Funeral Homes and Crematory, 120 South Public Square, Knoxville, IL 61448. On-line condolences and/or expressions of sympathy may be sent through www.hurd-hendricksfuneralhome.com

The family of Jimmy Dean Wyman created this Life Tributes page to make it easy to share your memories.

Jimmy Dean Wyman, 64, of Galesburg, passed away at home on Monday,...

Send flowers to the Wyman family.