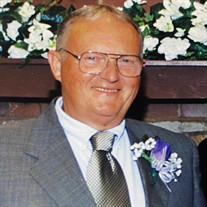 Jerry L. Hutson, 80, of Avon, died on Friday, October 16, 2020, 3:45 PM, at Seminary Manor, Galesburg. Jerry was born on Friday, September 13, 1940 in Sedalia, MO. He was the son of Sherman and Bonnie (Sellers) Hutson. Jerry married Rose Mary Brangers in 1965 at Elizabethtown, KY. He later married Rose McKenzie on September 24, 1983 at St. Mary’s Chapel in Knoxville. Jerry is survived by his wife, Rose of Avon; children, Susie (Floyd) Gray, of Knoxville and Tony (Robin) Hutson, of Aurora; three grandchildren, Kassie Karssen, Hanover, IN, Katie Karssen, Wellington, FL and Kaleb (Emily) Karssen of Camp Pendleton, CA; step granddaughter, Sondra (Tony) Flores of Bettendorf, IA; step great-granddaughter, Harper; two nieces and a nephew. He was preceded in death by his parents; brother, James; sister, Mickey; and his former son-in-law, Mike Karssen. Jerry graduated from Roseville High School in 1958. He then served in the United States Army, where he was stationed at Fort Knox, KY during the Vietnam War Era. Jerry was extremely proud of serving his country. He then went on to work for the CB&Q Railroad retiring as a Yard Control Operator for BNSF after 43 years. Jerry loved to go boating and camping. He especially enjoyed taking his grandchildren on summer road trips with his camper. He also enjoyed bicycling and would travel around visiting bike trails around the country, many built on abandoned rail lines. He also enjoyed wood working. When not traveling, Jerry enjoyed simply spending time at his home on the lake. Jerry also appreciated a good gin and tonic. He was a member of the Prairie Hub Club. Jerry had a life long interest in all thing’s science fiction. He was extremely interested in science fiction, outer space, and extra-terrestrials, in addition to a good ghost story. Jerry was passionate about “going home” and expressed in his wishes that a portion of his cremated remains be sent in to space, a request that his family will see to it is fulfilled at a later date. Cremation rites have been accorded. A private burial of cremated remains will be held at the Knoxville Cemetery, Knoxville. Arrangements have been entrusted with Hurd-Hendricks Funeral Homes and Crematory, Knoxville. Memorials may be donated to the FISH Food Pantry or to a charity of the donor’s choosing. Expressions of sympathy may be left for the family at www.hurd-hendricks.com.

The family of Jerry L. Hutson created this Life Tributes page to make it easy to share your memories.

Send flowers to the Hutson family.