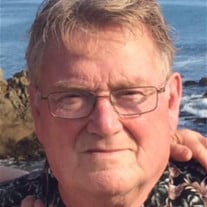 Jerry D. Anderson, age 78, of Knoxville, formerly of Galesburg, Illinois, died on June 5, 2019 at home in the arms of his wife, after a lengthy illness. All who have spent any time with the couple together are used to hearing a comment from Jerry, immediately followed by a stern “Jerry Anderson!!!” from his wife. Visitation will be held on Tuesday, June 11, 2019 from 5:00 P.M. to 7:00 P.M. at the Hurd-Hendricks Funeral Home in Knoxville. A funeral service will be held at 11:00 A.M. on Wednesday, June 12, 2019 at the Hurd-Hendricks Funeral Home, Rev. Kenn Shedenhelm presiding. Burial will be at the Knoxville Cemetery with full Military Honors conducted by the VFW/Legion/AmVets Honor Guard. A luncheon will be served following the graveside services by the good Christians at Jerry’s church, First United Presbyterian Church of Knoxville. Memorials may be made to his church family, First United Presbyterian Church of Knoxville; or to the fine folks at OSF Hospice, who helped care for him and our family. Jerry was born in Galesburg to Raymond Ewing and Mary Ann (Fuller) Anderson on May 17, 1941, becoming the younger brother of Rodney Gene Anderson; and they were younger brothers to Robert Raymond Anderson, whom neither were able to meet. Jerry graduated Galesburg High School in 1959, and attended Carl Sandburg College. He served in the United States Air Force from 1960 to 1966 where he was a cook. He had the honor of being stationed at the hospital in Goose Bay Labrador. Jerry’s dream was to be a policeman, but those darn height requirements stood in the way. Jerry hired out to the CB&Q Railroad as a baggage clerk being promoted through his 36 years of service to Brakeman then Conductor (as well as “off the record” Engineer). He survived with fellow trainmen through mergers to Burlington Northern then Burlington Northern - Santa Fe Railroad to retire in 2001 due to a household accident (ask Ginnie). During his retirement he worked for 13 years at VNA Community Services assisting seniors and disabled individuals by providing needed transportation. In Jerry’s spare time, he had a house painting/wallpapering business, which he later partnered with his son Raymond. Jerry loved sailing, and owned several sailboats. His caution to all boat owners, “beware of turtles." Jerry’s greatest pride and joy (even before collecting model/toy cars) are his children. First in line, Raymond Gene (Wendy) Anderson of Alexis, Illinois, a product of his marriage to Georganna (Cadwell) Klockenga. During his marriage to Patricia Thompson, he adopted her children: Robert Allen (Kristin) Anderson of Edmond, Oklahoma and Glenn Michael (JeanMarie) Anderson of Galesburg. And Darci Elizabeth (Ron) Samuel of Allegan, Michigan and Wesley Morgan Anderson of Knoxville, Illinois are the product of his marriage on September 22, 1985 to current wife, Virginia “Ginnie” Louise (Saxer) Anderson. Jerry loved his grandchildren greatly and was reluctant to leave them in their youth. Raymond’s children: Savanna Grace, Kylei Joanna, and Erik Raymond Anderson; Darci’s children: Dominik Mckenzie and Vincent Jerry Samuel; and Jerry will be watching from heaven for Wesley’s children in the future. Jerry was preceded in death by his parents; an older brother, Robert Raymond Anderson; Georganna Klockenga; Patricia Anderson; and son, Glenn Anderson.

Jerry D. Anderson, age 78, of Knoxville, formerly of Galesburg, Illinois, died on June 5, 2019 at home in the arms of his wife, after a lengthy illness. All who have spent any time with the couple together are used to hearing a comment from... View Obituary & Service Information

The family of Jerry D. Anderson created this Life Tributes page to make it easy to share your memories.