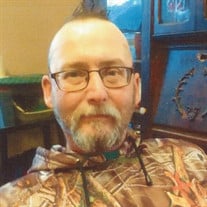 Jason T. Bent, 45, of Gilson, passed away at home on Saturday, July 10, 2021 at 1130 AM. Jason was born on January 11, 1976 in Galesburg, Illinois. He was the son of Theodore “Ted” and Karen Sue (Cowman) Bent. Jason met the love of his life, Beckie Ernst, six years ago. On July 11, 2020, they decided to solidify that love at Bent Farms by getting married. Jason is survived by his wife, Beckie at home; son, Wade; sisters-in-law, Lori (Steven) Storey of Bathalto, Jenny (Doug) Harmon of Trivoli, and Jamie Ernst of Farmington; and many friends. He was preceded in death by his parents. Jason was a graduate of Knoxville High School. He worked in the shipping department of Midstate Manufacturing as a fork lift driver for the past 17 years. Jason was a volunteer firefighter for both the Knoxville and Gilson Fire Departments, and a member of the Masonic Lodge. In his free time, Jason loved to hunt and fish. He was enamored with fireworks, and obsessed with playing checkers. Most of all, Jason was a homebody and enjoyed spending time relaxing at home. He also enjoyed sharing a beer with the members of his inner circle. Jason cared deeply for those he loved and will be greatly missed. Visitation will be from 11:00 AM – 1:00 PM on Friday, July 16, 2021, at Hurd-Hendricks Funeral Homes and Crematory, 120 South Public Square, Knoxville, IL 61448. Funeral Services will follow visitation at 1:00 PM at the funeral home. Burial will be at the Maquon Cemetery, Maquon. Hurd-Hendricks Funeral Homes and Crematory have been entrusted with arrangements. Memorials may be made to the Knox County Triad. On-line condolences and/or expressions of sympathy may be sent through www.hurd-hendricksfuneralhome.com

The family of Jason T. Bent created this Life Tributes page to make it easy to share your memories.

Send flowers to the Bent family.