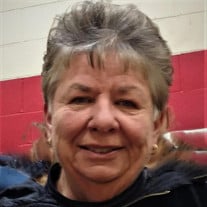 Janita S. Johnston, 78, of Altona, passed away on Wednesday, February 2, 2022, 5:45 PM at Marigold Nursing and Rehabilitation Center. Janita was born on December 12, 1943 in Galesburg. She was the daughter of Don and Dorothy (Moody) Fay. Janita married the love of her life, Gail Johnston on November 11, 1962 at Bethel Baptist Church, Galesburg. Together, they built a life of faith and love that spanned 59 years. Janita is survived by her loving husband, Gail; children, Terri (Craig) Lee of Jacksonville, NC, Greg (Cathy) Johnston of Wataga and Doug (Roger Cardenas) Johnston of Detriot, MI; six grandchildren, Codee Lee, Harlie Lee, Thomas (Stephanie) Lee, Gunner Johnston, Lizzie Johnston and Cooper Johnston; and a brother, Carol (Nan) Fay of Metamora. She was preceded in death by her parents and brothers, Dean Fay and Bob Fay. Janita is a graduate of ROVA High School. After high school, she went on to graduate from Midstate College with a degree in Medical Records. Janita worked in the medical records department for OSF until her retirement in 2012. She was a member of Bethel Baptist Church. In her free time, Janita loved to sew, garden, volunteer. She loved her bible study, Sunday school and CIRCLE church groups. Most importantly though, she loved to spend time with her family, especially attending the grandchildren’s many sporting events…even if she had to cheer them on outside and through the window because she was just “a little too spirited” for the officials. Janita was a strong but open minded, loving, church-goin’ woman, whose faith and testimony were strong and her compassion ran deep. Cremation rites have been accorded. A memorial service will be 12:00 PM, on Tuesday, February 8, 2022 at Hurd-Hendricks Funeral Homes and Crematory, Oneida. Visitation will be one hour prior. Hurd-Hendricks Funeral Homes & Crematory will be assisting the family with their services. . Memorials may be donated to Beacon of Hope Hospice or the Alzheimer’s Association. On-line condolences and/or expressions of sympathy may be sent through www.hurd-hendricksfuneralhome.com

Janita S. Johnston, 78, of Altona, passed away on Wednesday, February 2, 2022, 5:45 PM at Marigold Nursing and Rehabilitation Center. Janita was born on December 12, 1943 in Galesburg. She was the daughter of Don and Dorothy (Moody) Fay. Janita... View Obituary & Service Information

The family of Janita S. Johnston created this Life Tributes page to make it easy to share your memories.

Send flowers to the Johnston family.