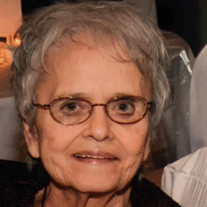 Jane Elaine (nee Kelly) Graves Nelson, 84, of Altona, passed away on Monday, August 23, 2021, 6:42 AM, at her home. Jane was born on February 11, 1937 in Kewanee. She was the daughter of Russell T. and Ruth E. (Hoeg) Kelly. Jane married Samuel E. Graves in 1954, he preceded her in death in 1967. She later married Vaughn E. Nelson in 1971. He preceded her in death in 1994. Jane is survived by her eight children, Elaine (Danny) Ferrell of Big Rock, TN; Steve (Julie) Graves of Illinois City; John (Micki) Graves of Oneida; Perry (Judy) Graves of Altona; Cindy (Cary) Humes of Galesburg; Mary (Doug) Roley of Ballwin, MO; Kristen (Joe) Quinn of Stamford, CT and Timothy Nelson of Altona; four step-children, Susan Nelson of Bettendorf, Nancy Sturgeon of Galesburg, Pam Dugas of Bakersfield, CA and Charles (Julie) Nelson of Galesburg; sisters, Kay Palmer of Cambridge and Kris Ann Smith of Galva; twenty-nine grandchildren; forty-nine great-grandchildren; and four great-great grandchildren. She was preceded in death by her husbands; spouses Samuel and Vaughn; step-daughter, Angela Lane; granddaughter, Heather Graves; grandson, James Nelson; and sons-in-law, Jerry, Mike and Denny. Jane attended Galva schools. She was a member of the Immanuel Lutheran Church of Altona. Jane drove a school bus for the ROWVA School District for 32 years. She was also the village clerk of Altona for 20 years. Family was important to Jane. Her children and grandchildren were the center of her world. Jane was a gentle and kind lady who loved everyone. Jane especially loved to attend sporting events of her children and grandchildren, especially the football games. Jane was loved by many and will be greatly missed. Visitation will be Thursday, August 26, 2021 from 5-7 PM at Immanuel Lutheran Church, Altona. Funeral Services will be 11 AM, Friday, August 27, 2021 at Immanuel Lutheran Church. Reverend Tim Anderson will officiate. Cremation rites will be accorded following services. Memorials may be made to Immanuel Lutheran Church of Altona or to the A.O.W. (Altona-Oneida-Wataga) Ambulance Service. Hurd-Hendricks Funeral Homes and Crematory, Oneida have been entrusted with arrangements. Expressions of sympathy may be left to the family at www.hurd-hendricksfuneralhome.com.

The family of Jane E. Nelson created this Life Tributes page to make it easy to share your memories.