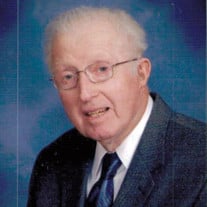 James L. Walker, 87, of rural Gilson, passed away peacefully at home surrounded by his family on Tuesday, July 21, 2020 at 4:53 am. James was born on May 12, 1933 in Galesburg. He was the son of Clarence L. and Florence M. (Swanson) Walker. He married the love of his life, Marian L. Carlson on April 28th, 1957 at the First Lutheran Church in Galesburg. Together they celebrated 63 years of marriage. James is survived by his wife at home; children, Kenneth (Debbie) Walker of Gilson, Wayne (Nedra) Walker of Knoxville, Gary (Jackie Weidenhamer) Walker of Gilson and David Walker of Gilson; sister, Eloise Swisher of Roseville; eight grandchildren, Chris (Beth) Walker, Jacalyn and Kaitlyn Walker, Becky (Caleb) Bennett, Tyler (Brittany) Walker, Brett, Lukas Walker, and Jadyn Walker; three step-grandchildren, Amanda Ray, Sarah Gossage, Daniel Beauchamp; seven great-grandchildren, Emma, Jaxson, Luella, Hank, Jake, Bryar, Emersyn and one on the way in November; and nieces and nephews. James was preceded in death by his parents; daughter-in-law, Amy Walker; and a brother, Richard; nephew, Harold Davis. James attended country schools. He was a member of the 1952 graduating class at Knoxville High School. James is a veteran of the United States Army, serving from 1953 to 1955. He was engineer equipment mechanic and served in the Korean Conflict. After returning home, James was a farmer in the rural Gilson area. He was a member of the Grace Lutheran Church in Knoxville. He was a member of the Knox County Farm Bureau, serving on the board; Knox County Pork Producers; Knoxville Harry Philblad American Legion #749, Knoxville. James was a Jaycee’s “Outstanding Farmer” ranked 1st in Knox County and 2nd in the state of Illinois. James was able to go on the Honor Flight on May 4, 2017. Marian and James would enjoy spending the winters in Florida, traveling in their motor home, and vacationing around the world. Visitation will be held on Saturday, July 25, 2020 from 9 AM – 12 PM, at Hurd-Hendricks Funeral Homes and Crematory, Knoxville. Funeral Services will follow at noon with Myron Miller officiating. Internment will be at the Knoxville Cemetery with military rites. Memorials may be donated to Grace Lutheran Church, Knoxville or Knox County Farm Bureau Foundation. Due to COVID-19 restrictions, face masks and social distancing will be required. On-line condolences or expressions of sympathy may be made through www.hurd-hendricksfuneralhome.com.

The family of James L. Walker created this Life Tributes page to make it easy to share your memories.

Send flowers to the Walker family.